Looking Back - The 1999 Yellow Jersey Story

I had an unexpected visitor stay at my house on Monday night - Lance Armstrong. By now, all of you know why he was at my house, instead of with the team at the hotel. Sitting around the table drinking wine, we spoke about some great memories. And it made me think about this one story I wrote a number of years ago. I thought I would share it again! Thanks - JB

This is a story about a jersey, an important jersey to me. But first you have to know that I am not really a "trophy guy" - I don’t really keep anything in terms of memorabilia, so knowing that you will understand the significance of what I am about to tell you…

It all started with an email from a man I did not know - a collector named Roy Wiggins - and it said: "Please find attached an image of one of Lance's 1999 TDF postal yellows, which he dedicated to you. I have an opportunity to obtain this item, which I intend to auction off to raise funds for the LAF. Can you tell me: What stage from the 1999 race it is from? And surely it is a sentimental piece, why did you let it go?"

And indeed a picture of the jersey was attached - and here it is: 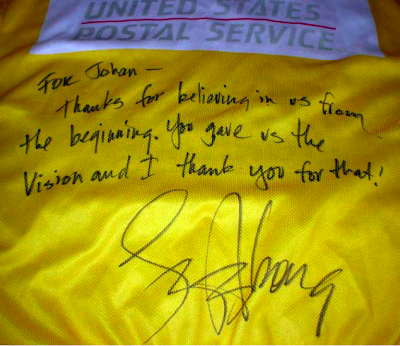 I was shocked when I saw this. Yes, I do have a yellow jersey from each of the seven Tours de France and this was definitely one of them - but they're somewhere in a closet, not framed on a wall. And so I started to contact Roy and told him that I must have lost a piece of this story because while I know this jersey is mine, I was trying to figure out how it ended up on Ebay.

As I kept thinking about it, certain facts started to come to light. A few years ago I sold my house in the south of Spain. It rented out for a while, but there was still one room that had some of my things in it, mostly cycling clothes from years gone by. When the house sold I wasn’t there when the people moved in, but I had some friends of mine looking after the house for me. They called me and said, "We're emptying the house, and there's a lot of cycling clothing here. What do you want to do with it?" This couple had a 14 year old son who likes to ride his bike, so I said, “Just give it to him.” And so he got a nice box of clothing from Rabobank, ONCE, etc. - but apparently this yellow jersey was in there also.

As you might imagine, the young man didn’t really understand the value and significance of this jersey, and when his school asked for items to be donated to support the tsunami relief fund, he said, "Oh, a Tour de France jersey - that should help!" and he gave his newfound jersey for that.

Soon after it ended up on Ebay, and it went from collector to collector until Roy saw it and contacted me. He told me he had the opportunity to buy it outright, but even though he was a collector he really wanted the jersey to be back where it belonged. I was very flattered that he would go to this effort for me, and in the course of our email conversations I found out that he had been trying to get one of the Limited Edition Trek LIVESTRONG bikes signed by Lance. 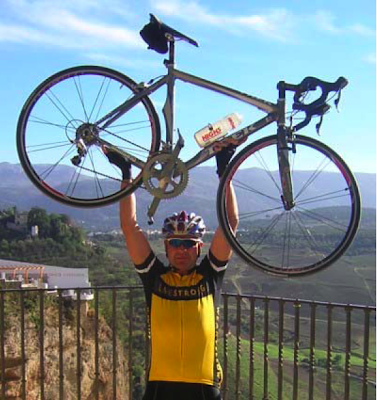 I got in contact with Scott Daubert at Trek, told them the story, and they arranged for me to buy a bike for Roy. The short ending to this story is that I got my jersey back and Roy got the bike he had really wanted, and everyone was happy, so many thanks to Roy and Trek Bicycles. But in the course of this happening, the collectors' world - which is a fairly small community - knew this jersey was out there and were looking to purchase it. Roy kept telling them that it was coming back to me, but they wouldn’t believe him. One collector not only offered him $50,000 for it, but in fact wired the money to him, sight unseen! But Roy sent the money straight back to the guy who sent it... The bottom line is Roy Wiggins is a really nice and honest guy, and he didn’t have to do this for me at all. And I also really appreciate the people at Trek for helping me as well. There are some things in life that are very special – not in their material significance, but in what they represent - and for sure winning the 1999 Tour de France is something well worth remembering.

Thanks again, Roy - Johan
Posted by Recovox at 6:53 PM

HI - THAT PERSON IS ME - ROY WIGGINS - SO NICE TO SEE SUCH A COOL STORY COME BACK TO THE WEB - I AM STILL IN CONTACT WITH JOHAN - A GREAT GUY.