Taylor Phinney Lives Up To Promise 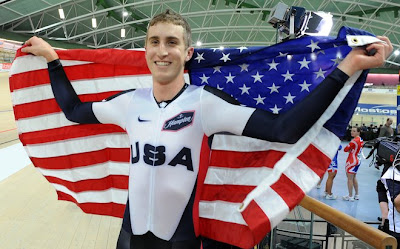 American Taylor Phinney lived up to his promise of taking the rainbow bands in the men's individual pursuit on Thursday evening. The 18-year-old bested Australian Jack Bobridge in the final, taking gold with a 4:17.631.

Phinney led from the gun, building up a lead of fractions of a second over the first kilometre of the 4km event, but fell slightly behind Bobridge over the second kilometre. The American rallied in the third quarter, building up a half second lead which he solidified through a strong final leg to win by 2.46 seconds.
Posted by Recovox at 1:32 PM