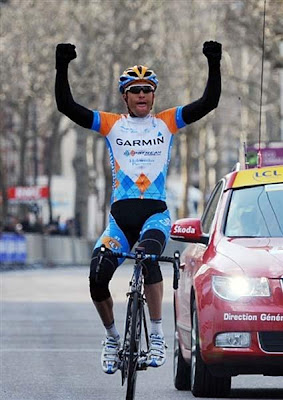 Christian Vande Velde (Garmin - Slipstream) took a brilliant solo win when he attacked out of the break of the day and soloed away for the final 20 kilometres. Sylvain Chavanel (Quick Step) was attacked by Alberto Contador (Astana) on the final climb of the day, but held on to his yellow jersey by six seconds over Juan Manuel Garate (Rabobank).

Chavanel was happy to have retained the jersey, but knew that the fight was on. "This shows that Contador doesn't just want to give up Paris-Nice like that."