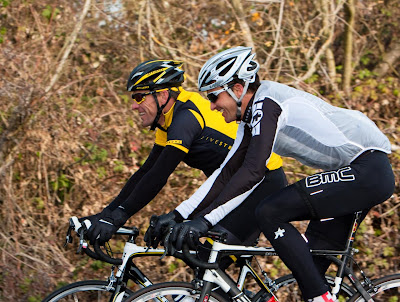 Lance Armstrong's broken collarbone, the Fracture Heard 'Round The World, was a first in a notably mishap-free road racing career.

Armstrong, who is expected to have surgery on his right clavicle in Austin, Texas, early Wednesday morning, may be an expert at many things. But he's an untried newbie at rehabbing this kind of injury with the start dates of the two most important races of his calendar, the Giro d'Italia and the Tour de France, barreling toward him in early May and early July, respectively.

If he wants advice, he might want to caucus with another American rider, Scott Nydam of the U.S.-based Pro Continental-level BMC team, who has broken his left collarbone four times -- twice since last August -- but is about to race again at this weekend's Redlands Classic in San Bernardino County a scant 4½ weeks after his latest surgery.

"Actually, I've broken it five times," Nydam said in a phone interview from his home in northern California, "counting the time I re-broke it.

"Someone like Lance, what he's been through medically, he knows his body so well -- he'll know what to do," said Nydam, who often trains with Armstrong's Astana teammate Levi Leipheimer in and around Santa Rosa, Calif. "This might sober him up to what he's up against. Maybe he'll dig deeper."

The first two times Nydam fractured his clavicle, he wasn't riding for a living, and opted to let it heal on its own. He was lying on the floor stretching out not long after removing the sling the second time around when he heard a telltale crack, and realized he'd just undone whatever mending had taken place.

That convinced Nydam surgery was called for when he crashed at the Tour of Utah last summer.

"If you're an amateur, you save the money and wait it out," Nydam said. "Both ways work -- one is just more calculated and expedient. With surgery, you avoid the two or three weeks where you stay immobilized and wait for the bone to find itself and reconnect. You stabilize the collarbone, but you can still keep your legs moving."

Nydam has been on both sides of the fence. The 31-year-old, who has a college degree in sociology, rode as an amateur through his 20s. He quit a construction job and turned pro three years ago. Since then, he's compiled some impressive results, earning the King of the Mountains designation in the 2008 Tour of California.

But this year's edition of the race ended abruptly for Nydam in Stage 4. He had just taken a jacket from the moving BMC team car when part of the garment got caught on his brake lever, bringing him down, frighteningly, right in front of the vehicle -- which ran over his front wheel, but fortunately, not his body. He suffered a concussion, and his clavicle snapped right at the end of the titanium plate that had been inserted just six months before.

Nydam knew the drill by this time.

"I crashed Wednesday, and I was in and out of surgery Friday afternoon -- in after lunch and out before dinner," said Nydam, both of whose operations were performed by BMC and USA Cycling team physician Dr. Eric Heiden, the multiple Olympic speedskating gold medalist who is now an orthopedic surgeon. "The bone is right under the skin, so they don't have to do a lot of digging around."

Recovering from the general anesthetic, and the general trauma of a bad crash, is often more difficult than the surgery itself, he added. "If you went down hard enough to break your collarbone, there's a good chance you've done some collateral damage," said Nydam. He still has some unrelated pain in his ribs and back, just as Armstrong will have to deal with bruising on his right side.

Nydam was on a stationary bike within a couple of days of the crash last month, and on the road in a week and a half -- a little earlier than doctors would recommend.

"I jumped the gun a little bit," Nydam admitted. "But it's just a matter of keeping it stabilized. It's more dangerous to pick up a coffee cup. I was guided by pain. If I didn't feel pain, I'd ride."

He hasn't yet attempted a time trial position, which Nydam called a little more "awkward" because of the stress that peculiar tuck puts on the shoulders and arms. "But that's a fixed position," he said. "The hardest thing is when you jump out of the saddle [climbing], and you're moving your bike around, throwing the bars right and left." It took Nydam three weeks before he could try that kind of effort, he said.

But from his perspective, Nydam said he's confident the seven-time Tour de France winner will be at the start line of that race in July with no problems -- and could even be competitive at the Tour of Italy, which starts May 9.

"The collarbone won't be an issue by then," Nydam said. "It's not the time it'll take for the bone to heal, it's how much fitness he'll lose -- race fitness.

"[Armstrong] hasn't raced since the Tour of California, and he just had the one day at Milan-San Remo and then he crashed. I know the way I feel right now. I trained hard for California and then it ended short. I'm overloaded with training and I need to race."
Posted by Recovox at 8:27 AM