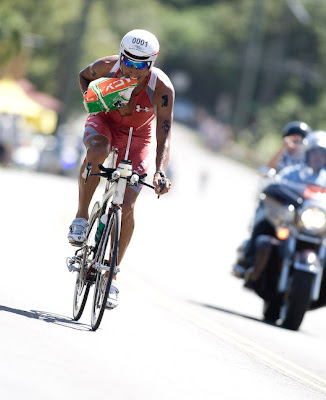 In his home away from home, Australian and 2-Time World Champion Chris McCormack won yet again on the blistering roads of Hawaii. As always, the big island winds were showing their teeth in ninety degree temperatures that feel more like a sauna as Macca showed why he's the world best all around Triathlete. The 11-Time Ironman Champion not only won on the difficult Olympic Distance course, he broke the course record set by Olympic Gold Medalist Simon Whitfield back in 2004. In fact, McCormack smashed the record by more than two minutes!

When asked how he's feeling after only his second race of the season, McCormack replied, "Today was a test for me on many levels and my form is coming around rather well. It's right where I want it to be this time of year and am building it up to where I want it to be. I'm excited about racing the 70.3 events in New Orleans and China over the next few weeks. I feel strong right now and today was a great test on a hard course and in tough conditions. I've really come to love Hawaii and the crowd support here is just amazing."

"I love these type of 'old school' events where it's no wetsuit and no drafting!", stated McCormack. But today was important for me as I was testing a new position on my Specialized Transition as well as my new custom made Zipp wheels. And I raced in Under Armour racing flats for the first time. I'm pretty stoked about it! I've worked closely with the UA team to develop a high performance racing flat and I gave them the biggest test yet. This is a hit out in hot humid conditions in Hawaii. It doesn't get much tougher on a shoe than this and it's also the exact conditions I will be racing in Kona later this year. So the feedback is imperative. I have been doing some solid run training sessions in these shoes, but nothing tests a product like racing and that was the purpose of today's event. I wanted to try out my position on the bike, the wheels in these winds and the shoes in this hot and sticky weather. Needless to say, it all went perfectly and I'm thrilled with the results!"

When asked of his plans to celebrate, Macca stated, "I'm jumping on a flight mate." With no rest for the Champ, McCormack will be racing in the inaugural Ironman 70.3 New Orleans next weekend and the 70.3 China in Haikou China on April 19th. Among other races in 2009, McCormack will be racing in Morgan Hill California on May 17th as well as Ironman 70.3 Austria on May 24th. He'll then defend his Ironman Title at Ironman Frankfurt on July 5th and of course will be back at the Ironman Hawaii World Championship this October.
Posted by Recovox at 10:14 AM