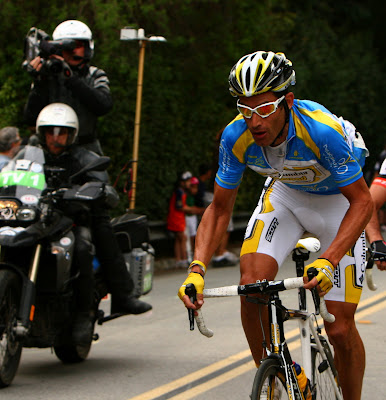 George Hincapie will skip Driedaagse De Panne this week for one of the few times in his 16-year career to be ready for his season objectives at the Ronde van Vlaanderen and Paris-Roubaix. The American of Columbia-Highroad, 2004 winner of De Panne, will pass a week at his European base in Spain.

"I think it is a bit too dangerous and there are too many risks there, I want to limit those chances," he said. "I have had a lot of racing and I have trained super hard this year. I prefer to go back to Spain and train in nice weather to be a little fresher for Flanders."

Hincapie finished eighth in the E3 Prijs Saturday. The race was won by Italian Filippo Pozzato (Katusha) after the winning move was formed by Hincapie's ex-teammate Tom Boonen (Quick Step).

Hincapie credits his strong 2009 season to his first ever season debut in the Tour Down Under in Australia. It appears to have paid off: he helped Thomas Lövkvist win Eroica Toscana, showed extremely well in both mountain and flat stages of the Tirreno-Adriatico and hand-delivered mark Cavendish to the win in Milano-Sanremo.

Though the rider from South Carolina has won in the Tour de France, he prefers the one-day Classics of Northern France and Belgium. He has battled with the sport's biggest names over the pavé in the past to earn third in Ronde van Vlaanderen, a win in Gent-Wevelgem and a second and two fourths in Paris-Roubaix.

"It feels good to be back in Belgium. These next races are obviously very important to me. I feel good and probably better than ever, so I would like to take advantage of that form to be at my top in Flanders and Roubaix."

He will ride the final 100 kilometres of the 260-kilometre Ronde van Vlaanderen Sunday. After scouting 14 of the 16 climbs, he will board a plane for Girona, Spain.
Posted by Recovox at 10:22 PM