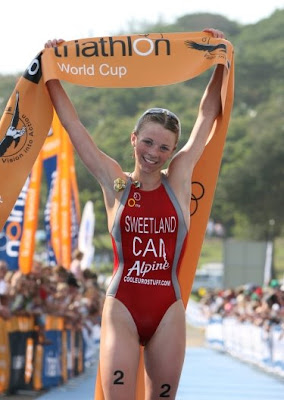 The opening leg of the 2009 ITU Triathlon World Cup Series was won by 20 year old Kirsten Sweetland from Canada as she started 2009 with a bang, beating Olympic Games bronze medallist and local favourite Emma Moffatt to the gold in a time of 2:02:00. In third was under23 World Champion, Switzerland's Daniela Ryf.

Having taken most of 2008 off due to injury, and failing to qualify for the Olympic Games, Sweetland raced ten World Cup events in 2007, and registered her first win with victory at Richards Bay in South Africa. Today's result marks her third appearance on the podium.

“What a great way to come back, today just felt effortless,” said Sweetland. “I race best when it is a little lighthearted, without pressure and today I just felt like I was doing what I love, it is a great way to start the new season.”

Sweetland has based herself in Brisbane since October and the move has clearly paid off.

“That is the first 10km run for me in a long while. I followed my coach’s instructions and started slowly and felt great in the second half. I was always comfortable.”

The swim venue in Mooloolaba changed from the coast to a local river because of large swells in the Pacific, but that didn't stop an exciting start to proceedings as a breakaway group of eight including Sweetland, Moffatt, Ryf and Oceania Champion Annabel Luxford, emerged from the water and established a healthy lead on the cycle.

Despite the best efforts of New Zealand national champion Debbie Tanner, and 2008 ITU World Cup Series runner-up, Felicity Abram from Australia, the chase pack could not work their way back to the leaders, and so the group of eight carried a 90 second advantage onto the run.

Moffatt and Sweetland accelerated away early with Ryf holding on to third place ahead of New Zealand's Nicky Samuels. Further back Abram ran strongly to catch the lead pack athletes with Tanner moving up to eighth.

Sweetland managed to drop Moffatt by the half way point on the run and continued to extend her advantage, crossing the line 55 seconds ahead of the local favourite. Ryf managed to hold off Samuels for third with the fast finishing Abram breaking into the top five.

“That hurt out there, especially on the second part of the run,” said Moffatt. “The hills and the wind were a real battle on what was a challenging course today. The swim felt like there was a surf, and the bike was very windy, especially coming back into town and transition.”

It was however the best result for the Australian in her home World Cup, and a first podium.

“It is nice to finally get Mooloolaba out of the way in terms of a good result. I have had a reasonably short prep with just five weeks with my new coach (Craig Walton) so I feel good and am looking forward to the season ahead.”

Ryf was similarly pleased with her first up effort in 2009, the young Swiss finding her rhythm in the second half of the run.

“I am happy with that race, I was a bit rusty early on the run but happy with my finish. It was a good race, very active on the bike with everyone working hard. I am looking forward to the next four week training block and the first World Championship event.”