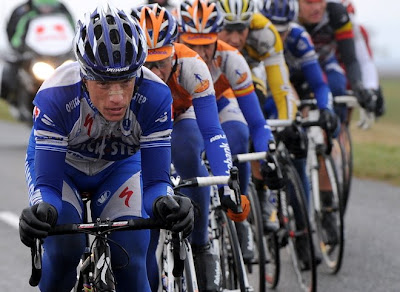 Sylvain Chavanel (Quick Step) won the third stage in Paris-Nice and took over the yellow jersey from Alberto Contador. Contador was surprised by a Rabobank attack on a rainy day with heavy cross winds. He finished more than a minute behind in the peloton. Heinrich Haussler won the sprint of the peloton to retain his green jersey.

Rabobank hit the front with 50 kilometres to go with five riders and a few kilometres later the elastic snapped and a 20-man group was off the front. It was eventually reduced to 10, including four of the five men who broke away earlier in the day.

Stéphane Augé (Cofidis), Maciej Bodnar (Liquigas), Jürgen Roelandts (Silence-Lotto), Christophe Le Mevel (Française des Jeux) and Tom Veelers (Skil-Shimano) rode ahead of the bunch most of the day. Bodnar dropped back before the leaders were passed by the Rabobank train. Only Augé and Roelandts were in the final ten-man selection, both too tired to follow the attacks.

Chavanel came out from behind Flecha, who had tried to get away once with a kilometre to go and then again shortly before the finish.
Posted by Recovox at 9:38 AM