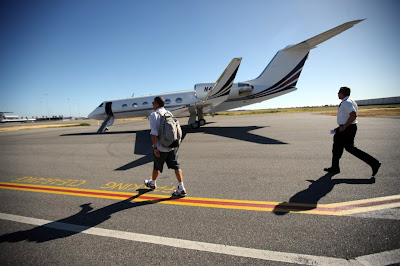 Two weeks after a seventh-place finish in the eight-stage Tour of California, Armstrong joined with several hundred riders for a promotional event Saturday night.

The seven-time Tour de France champion, who announced in September he was returning to competitive cycling after a three-year absence, is set begin the next portion of his comeback cycling in Europe.

Armstrong will ride in Italy’s Malin-San Remo race on March 21 and three days later he will participate in the five-stage Vuelta a Castilla y Leon in Spain for the first time in his career.

“It has a time trial and a couple of up hill finishes,” said Armstrong of the tour of Northern Spain. “I think it will be most significant because Alberto Contador will be there as well. I think it’s healthy and helpful for us to do a race together.”

“He’s riding great,” Armstrong said. “If he’s in a leadership position, I can go and work for him and do my job and help the team win.”

The Astana team also includes Levi Leipheimer, who won his third consecutive Tour of California on February 22 with Armstrong helping pace him through the demanding 750-mile event.

Armstrong rested for a day after the Tour of California, but quickly continued his comeback training near his home in Austin, Texas.

“Recovery was good, I kept going the following week, I did a big week right after, we did about 1,400 miles in those two weeks,” said Armstrong shortly after Saturday’s 2.2 mile promotional ride for a new art project he is collaborating on with Nike dubbed “Stages.”

Armstrong enlisted the help of some 20 artists who volunteered to create works that will help his foundation’s standing commitment to battling cancer. All the art work will contain yellow, the signature color for Armstrong’s “Livestrong” program. The complete collection will ultimately make it’s way to a gallery in Paris in July during the Tour de France

“I have a deep appreciation for art, no education when it comes to art, but for me when you turn the corner it either strikes you or it doesn’t,” said Armstrong, who has been an art collector for several years. “This is a great way to merge sports, art and fighting cancer.”

After riding in the two European events this month Armstrong will return to Austin to train. He hopes to ride in his first Giro d’Italia in May. His girlfriend, Anna Hanson, is due to give birth to the couple’s first child in June, with the Tour de France set to follow in July.

That’s a lot even for Armstrong to undertake.

“I’m not sure I can win the Tour de France,” Armstrong told the crowd at the Nike event Saturday. “It’s not going to be easy. I’m 37 years old, almost 38. I’ve been off the bike for a while. But I think the most important thing, even if I comeback and I take fifth at the Tour de France … the message we’re trying to deliver, the grassroots will hopefully make a difference.”
Posted by Recovox at 10:54 AM