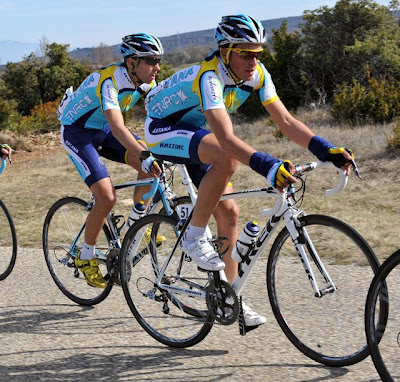 With only 36 seconds separating him from his second career victory in Paris-Nice, Astana's Alberto Contador had a relaxing day in the saddle on stage five. The contenders for the overall classification saved their legs for Friday's massive stage which finishes atop the 1600m Le Montagne de Lure.

The day, which was the longest of this year's Paris-Nice at 204km, had seven climbs packed into the first 113km, but, Contador said, after the initial attacks on the first climb, "It was the calmest stage of this tour."

The peloton worked to keep the three riders at a reasonable distance, setting a "comfortable" pace until the end, where the teams had to put more effort into the tempo in order to keep the gap to the escapees under control. He spent the day waiting and saving his energies for stage six, where the time gaps are likely to be larger.

"We need to take time over Chavanel, the same as with Gárate, who seems to be good enough. Then there is a series of riders at short distance, such as Antonio Colom (Katusha), Luis León Sanchez (Caisse d'Epargne) and also Samuel Sanchez (Euskaltel-Euskadi)."
Posted by Recovox at 3:27 PM