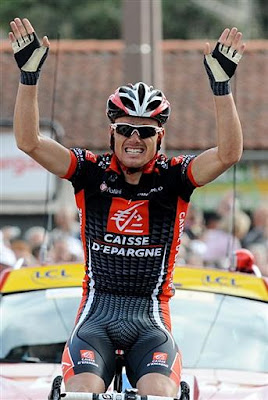 Luis León Sánchez (Caisse d'Epargne) stormed to a solo victory in the penultimate stage of the 2009 Paris-Nice, taking the yellow jersey off the shoulders of favourite Alberto Contador (Astana). Stunning attacks in the final kilometres in an elite front group of six men tumbled the overall classification, with Contador losing almost three minutes.

Sylvain Chavanel (Quick Step) moved one step up into second overall, 1:09 behind Sanchez, but he was at least as happy with receiving the green jersey at the end of the day thanks to his fourth place finish.

Sánchez could barely walk to the podium after the stage, suffering from cramps after his long solo attack. But the Spaniard was pleased to receive the yellow jersey. "I really want to thank my team today. I was definitely looking forward to the high mountains." Sanchez had kind words for his main rival Contador. "It is too bad for him, he had a jour sans. I hope he can recover well."

The final stage tomorrow in Nice will have to decide the winner of the prestigious stage race. 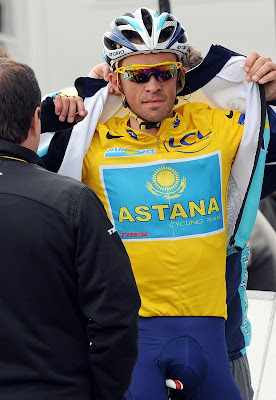