The Many Uses of Coconut Flour 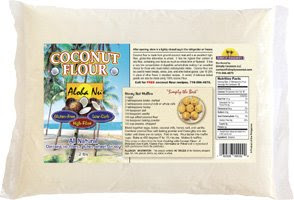 Coconut flour is simply dried, ground up coconut meat. Most likely you’ll be buying it online or from a specialty grocer, like Whole Foods or a food co-op, but you’ll occasionally come across highly processed, ultra-white coconut flour. Stay away from this. The good stuff will be like actual coconut – slightly cream colored, rather than bone white. You can make your own at home with a food processor, but without a grain mill you’ll probably have issues getting a “floury” consistency. If that’s okay with you, have at it.

Whether you’re making your own or buying it pre-made, always make sure your coconut flour is unsweetened. Pretty much all that you’ll come across is unsweetened, but it’s always worth it to make sure.

Apparently, defatting is one of the major steps in making it, so coconut flour doesn’t have much of the delicious, hearty coconut fat left over. It’s too bad, but understandable when you realize you’re dealing with a dry flour designed for baking. That’s pretty much my only qualm with coconut flour, as everything else looks good. According to my just-bought bag of Aloha Nu organic coconut flour, 2 tablespoons of the stuff contain:

Those are pretty great stats, especially when compared to the glucose-boosting powers of “normal” flours like wheat or white. Less hearty than almond meal, but also less heavy and closer in texture to the other, forbidden flours (if that’s what you’re going for). Coconut flour can be used to bake, but be forewarned that it’s very dry and doesn’t stick together well (hence its uselessness as a sauce thickener); avoid this problem by adding eggs to the mix, which allows it to bond and form batter. I’ve also had success using it in a light egg batter for fried coconut chicken. I’d assume it would work equally well for shrimp or fish.

Okay, onto a few recipes.

I’m not a big baker, but I can appreciate those who are. For those budding Primal bakers who still miss bread, why not try to make some with coconut flour? Slightly sweet and fairly light (as opposed to the denser breads made with almond meal), this coconut bread should do the trick.

Method:
Preheat your oven to 350. Whisk it all together, or blend in a food processor until all lumps are gone. Grease a bread pan with butter or coconut oil and pour your batter in. Bake for 40 minutes.

Drizzle these with honey and berries, wrap up some bacon and eggs for a Primal breakfast burrito, or just eat them plain. These things are incredibly easy to make.

Method:
Mix these ingredients and let them sit for five minutes. Oil or grease up your pan and heat over medium heat. Pour about a 1/4 cup of batter for each crepe, allowing each side to brown before flipping it.

Without accounting for toppings or cooking fat, FitDay says the whole batch amounts to:

This doesn’t even require an ingredient list. Simply take your chicken pieces (or shrimp, or fish), season them with salt and pepper, dunk them in an egg bath (just scrambled up raw egg), then dredge them in coconut flour, then back in the egg bath, and then coat with dried coconut flakes. After that, it’s just a matter of frying them in oil (use coconut) or sautéing them in some butter. Crunchy, delicious, and low-carb.
Posted by Recovox at 4:15 PM