Mark Cavendish Does His Job - Again! 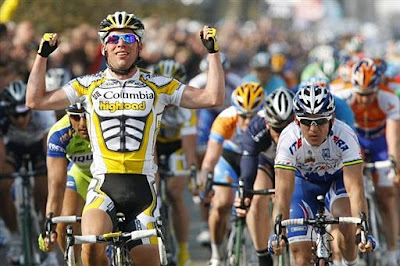 Mark Cavendish (Columbia-Highroad) did what people expected from him by putting the first bunch sprint in the Drieedaagse De Panne to good use. He outsprinted Robbie McEwen (Katusha) and Francesco Chicchi (Liquigas) on a windy day for a stage two win in the coastal city of Oostduinkerke.

The fans could be lucky that Cavendish participated in the exciting finale. "At one point, I nearly said, 'I won't do this [sprint]', as it was really, really dangerous."

The problem was too many riders were in the mix. "I think when it split at the Kemmelberg, we had a nice, small group with the strongest riders. But when we sat up at the run-in to the finish, everything came back together and everybody thought they had a chance."

Cavendish quickly dispelled any second thoughts. "It is my job you know. It is also my responsibility to the team, and obviously it is good for the sponsor." He also didn't want to fault the tired people who had made a comeback to give it a shot in a wobbly sprint. "It's their right. I would have done the same when I was younger – well, I still do sometimes..."
Posted by Recovox at 11:30 AM