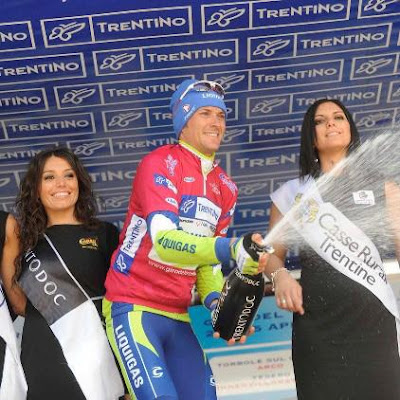 Ivan Basso is back to the top after a three-year break due to his involvement in Operación Puerto. The Liquigas Italian won the Giro del Trentino overall Saturday in Pejo Fonti, Italy. His last win was the 2006 Giro d'Italia.

"I am happy, it comes near my big objective [Giro d'Italia, May 9 to 31] and so it gives me a little bit more assurance," said Basso to Cyclingnews.

The race was decided on the last climb, Pejo Fonti. Liquigas worked with Di Luca to increase the pace and drop Janez Brajkovic (Astana), race leader since Thursday.

Pozzovivo shot clear towards victory in the climb's closing metres, but Basso personally closed the gap. He continued in a single-minded effort: the overall leadership.

Basso's overall win and the stage win by Di Luca show the promise of two former Giro d'Italia winners two weeks before the 2009 edition. Basso immediately left after the stage for tomorrow's Liège-Bastogne-Liège in Belgium. It will be his last race prior to the Giro d'Italia, May 9 to 31.

Besides Basso and Di Luca, Giro favourites Garzelli, Brajkovic and Gilberto Simoni (Diquigiovanni) rode well in Trentino. Andreas Klöden (Astana), winner of stage one, ended the stage race with bad news: German investigations may have linked him to blood doping in 2006.