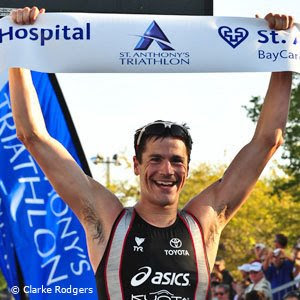 The 2009 edition of the St. Anthony’s triathlon in St. Petersburg, Florida came down to which athletes could overcome the obstacles that the racecourse threw at them. While the pros were left to battle rough waters, the age group swim was cancelled due to safety concerns.

All athletes also battled strong winds, with Americans Matty Reed and Mark Van Akkeren dealing with extra difficulties on the bike. Reed suffered a flat tire about midway through the bike course taking him out of contention, while Van Akkeren could not overcome the effects of a bike crash. In the end, Americans Andy Potts and Rebecca Wassner proved the importance of the run in an Olympic-distance race by posting the fastest 10k splits and taking the overall victories.

In the men's race, Potts found himself in unfamiliar territory as he exited the water in fourth position behind Americans Dustin McLarty, Mark Van Akkeren and Matty Reed. Potts worked hard to make up ground on his fellow competitors, posting the second fastest bike split behind New Zealander Torenzo Bozzone. With Reed out of the race, Potts continued his blazing pace off of the bike. Potts' 10k time of 31:38 gave him an easy victory for a total time of 1:46:33. Bozzone's fast bike split allowed him to hang on in the run and finish second with an overall time of 1:48:02. Great Britain's Stuart Hayes rounded out the podium with a time of 1:48:45.

The McLarty siblings proved to be the fastest swimmers of the field, with American Sarah McLarty also coming out of the water in first position. McLarty carried her power onto the bike, also posting the fastest bike split of the group. Behind her, long-course specialists Americans Dede Griesbauer and Bree Wee posted the second and third fastest bike splits. While Americans Rebeccah Wassner and Sarah Groff hung in the middle of the pack through the swim and bike, they quickly caught the competition on the run. Wassner and Groff posted the two fastest 10k times of 35:38 and 35:55 respectively, blowing them past the competition earning the pair a one, two finish. Wassner's overall winning time was 2:00:04, with Groff earning second with a time of 2:00:21. McLarty's advantage from the first two legs gave her a third place finish and an overall time of 2:00:27.