Hincapie one of Columbia's two-pronged strategy 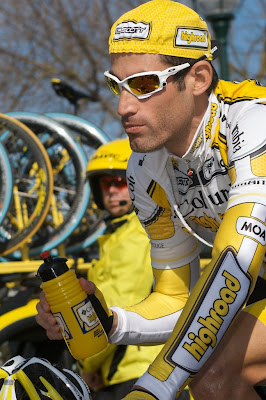 American George Hincapie will be one of team Columbia's leaders for the Ronde van Vlaanderen Sunday, and is said to have "the form of his life" according to directeur sportif Allan Peiper. This year, Hincapie skipped the traditional pre-Ronde prep race Driedaagse De Panne in order to be in top shape.

"We wanted him to be really fresh on the week-end," explained Peiper to Radsportnews. "He did one big training ride and then rested. He will be in great shape on Sunday."

Together with his German teammate Marcus Burghardt, the 35-year-old rider from New York is the hope of his team Columbia for the Belgian Classic. Hincapie, who placed eighth at the recent E3 Prijs, has had good results in the Ronde in the past, notably finishing fifth last year and third in 2006. He will thus rely on a lot of race experience to go for the victory, or help his younger teammate Burghardt, who also stands his chances.

Peiper is looking forward to the event, also because of the changed route this year. "It will be a whole different race this year," he said. "I think it will be one of the most open editions of the last few years."
Posted by Recovox at 1:11 PM