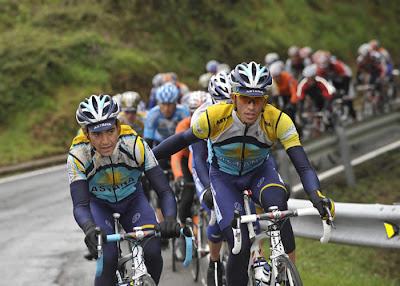 A last chance for top General Classification contenders to gain time before Saturday’s final time trial stage didn’t play out today in the 49th Vuelta al Pais Vasco. Team Columbia’s Marco Pinotti broke away from his leading group at and powered for the line, Wind, driving rain and cold made it anything but an easy day on the bike for the peloton of 140 riders as Team Astana controlled the race perfectly to protect the race lead of Alberto Contador. With Contador sitting just eight seconds in front of Samuel Sanchez (Euskaltel-Euskadi), Cadel Evans (Silence-Lotto) and Antonio Colom (Katusha) the race now boils down to the 24km time trial on Stage 6 and is considered wide open at this point. Hopefully clear skies will greet the riders in the start house on Saturday.

"I am happy as the team managed to control the race, despite the hardness of the day with the cold and rain," explained Contador. "They responded well to a potentially dangerous breakaway. They all did an incredible job, including Dani Navarro who suffered a lot because of his crash yesterday. Thanks to them I am still in the leader's jersey.”

Seven more climbs were on the profile Friday and a solid breakaway went after 43km of racing. Included in the group of seven riders were Andy Schleck (Saxo Bank) Joaquin Rodriquez (Caisse d’Epargne) and Egoi Martinez (Euskaltel-Euskadi). Despite wind and driving rain, the group established a time gap of that hovered near the one-minute mark. Most threatening to Contador’s yellow jersey was Rodriquez at 50-seconds behind on the overall. Despite being one man down with loss of Chris Horner on Thursday, Team Astana controlled the race well and kept the gap in check at all times and methodically brought them back into the fold at 30km to go.

After a failed first attempt to escape, Vladimir Ekimkin (Ag2R) tried again and this time was joined by Pinotti and Alessandro Vanotti (Liquigas). The three worked well together until the top of the final climb of Alto de Beci when Pinotti attacked and rode away from everyone else. Despite a desperate effort to catch him, the popular Italian rider had a clean ride to the finish and celebrated another victory for Team Columbia.

Saturday’s time trial will determine the final winner of the race. Contador is comfortable with his lead and looks forward to the race against the clock. “For tomorrow the overall GC is still very open,” he said. “Today’s stage passed the Alto de Beci a few times. That is already useful for tomorrow. On the other hand, I already checked the TT course this morning, before the 5th stage... in the car."