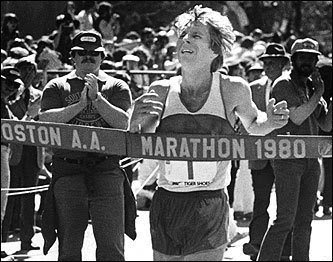 A runner forever, Rodgers returns to the event where he became a legend.

"I'm part of the back of the pack now," says the 61-year-old Rodgers, who won the Boston Marathon four times in six years. "I'm not where I was. I'm a different guy."

Yet the man who helped popularize road racing in America still has the urge to go the distance. Thirty years after he established an American record here and 10 since he last set out to run 26 miles, Rodgers will take the line in Hopkinton Monday morning wearing bib number 79 in his 60th attempt at a marathon and his 17th here.

Boston Billy is back.

"I'm not racing it, I'm running it," says Rodgers, who dropped out at Heartbreak Hill in 1999 in his last appearance at the world's most fabled race and hopes to break four hours this time. "I haven't been a marathoner for 10 years. I've been a half-marathoner."

Rodgers wanted to make his reentry last year to mark his 60th birthday, but had to opt out after having surgery in mid-January to remove his cancerous prostate gland. As soon as he could, he returned to the blacktop, and he plans on lacing up for as long as he can.

"I want to run," says Rodgers, who reckons that he has logged around 1,000 races in a career that spans three dozen years. "I've been a runner since I was a kid. I would never give up running if I had anything to do about it."

His place in history long ago was in scribed on the pavement. Rodgers was enshrined in the national halls of fame for both track and field and distance running more than a decade ago. He was named the world's top marathoner three times by Track & Field News, the sport's bible. He competed in the Olympics. Besides his four victories here, he also prevailed four straight times in New York.