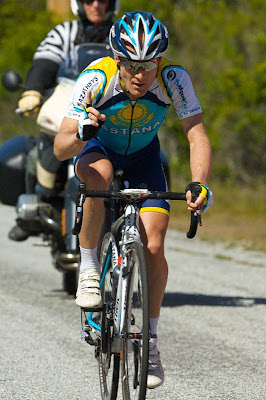 Astana's Levi Leipheimer picked up a close victory Friday at the 2009 Sea Otter Classic road race in a competition that he deemed to be a "training run". The Santa Rosa resident was racing on his own, without the benefit of his world-beating Astana team, but still he had the superior fitness and experience to pull ahead of the otherwise dominant Bissell Pro Cycling team at the top of a long, steep Ford Ord grade that marked the finish line.

Leipheimer decided early on that he was going to approach the Sea Otter road race as a robust training event in preparation for the summer race season. In pre-race comments Leipheimer not give himself much of a chance to win against the combined strength and cunning of the well-oiled Bissell boys, a commanding group of athletes who swept Thursday's Sea Otter criterium.

"This is home for me,” he said. “I came up through the ranks doing these local races and I appreciate them. And I wanted to keep a light spring training schedule. So, this is what I call free training – to get out there and battle with these guys. And it was tough.

Indeed, Friday was a spectacular one for a bicycle race. Refreshingly warm, with a slight coastal breeze to cool down the riders who might otherwise have overheated on the winding, hill studded 69-mile course. The course looped through the verdant sage and oak forests of the Fort Ord backcountry, the weather sparkled, but the star was clearly Leipheimer.

Using a wealth of world-class experience and a simple strategy – to stick closely with the Bissell team throughout, and then fight it out on the last hill – Leipheimer was able to chase down a series of breakaways. Bissell standouts Paul Mach and San Jose's Ben Jacques-Mayne led the attacks along with yesterday's criterium winner, Morgan Schmitt, who came in third in the road race.

"We had a pretty good day in the breakaways. We were trying to send as many guys up the road as possible to try and tire him out," said Mach.

Leipheimer proved to be more than up to the task of rabbit-chaser. The rider pedalled away to win by four seconds.

"We went pretty much into the bottom of the final hill together. Morgan went first, then Ben, and then I went and Levi was on my wheel. I tried to put in a dig at the end to see what would happen. But basically he (Leipheimer) just sat there, and then he passed me. He waited for a long time, and I guess that was payback for all of the pain that we put him through during the race," said Mach.
Posted by Recovox at 9:39 AM