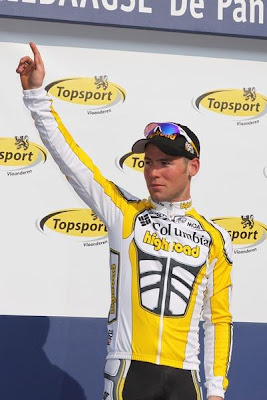 Rarely is there such a clear favourite as Mark Cavendish (Columbia-Highroad) will be Wednesday at Gent-Wevelgem. The 203-kilometre race often ends in a bunch sprint, thanks to flat terrain which is interrupted only by the Monteberg/Kemmelberg combo that has to be completed twice by the peloton.

Cavendish showed at Milano-Sanremo and the Driedaagse De Panne-Koksijde that he is currently the world's fastest sprinter. The Manxman also displayed his climbing capabilities when he gave chase over the very same Kemmelberg that punctuates Gent-Wevelgem during De Panne's second stage.

Cavendish admitted having a plan last week when he rode after Tom Boonen (Quick Step) over the cobbled climb. "I wanted to do a test and see how to position myself on the Kemmelberg," he said. The test seemed to have succeeded and even if the race should split over the Kemmelberg, expect Cavendish amongst the frontrunners.
Posted by Recovox at 9:09 AM