Faces In The Lineup - Scott Tinely 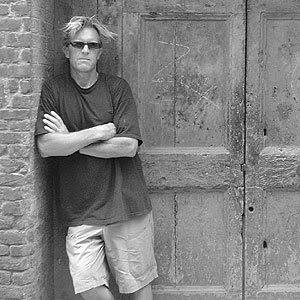 Scott Tinley is kind of a big deal in triathlon circles. Winning two Ironman World Championships and ranking as one of the three winningest triathletes ever, will do that. But in the water, to most surfers who aren't exactly hip to the triathlon scene, he's just another surfer trying to get his share of waves. And that's fine by him; he enjoys being just another face in the lineup.

When I interview him, Tinley downplays his prolific career, telling me that he wasn't that guy who excelled in one particular facet of triathlon -- he couldn't have picked up and turned pro in cycling like, say, one-time triathlete Lance Armstrong did -- but that he was one of those jack-of-all-trades type athletes. He concedes he wouldn't win now, even if he were competing in his prime. There's a charm to his humility -- a rare quality in professional athletes, and even rarer in champions; it's humanizing.

But Tinley, despite his modesty, can't hide what he is - a freakishly gifted athlete who gets bored easily. That's what's kept him bouncing around all these years, from sailing to swimming to running to biking to paddleboarding. The one constant, however, has been surfing. In recent years, though, Tinley has made a pretty unique crossover. Gone are the days of logging obscene amounts of mileage in the pool and on the road. Tinley's interest is peaked more now by challenges of the academic persuasion. See, Tinley's not just an enduro-nut, he's a thinker. Dude's got an MFA in Fiction, an MA in the Social Psychology of Sport, is pursuing his Doctorate in Cultural Studies and also moonlights as a college professor. He admits that the coursework, the demand, is tough, but you get the feeling that's what he likes about it. For a guy who made a career of grinding it out, this is nothing new. It's actually a perfect fit. So now, when his friends are creeping up on retirement, Tinley's still making out like a twenty-year-old, surfing five times a week and trying to finish school.

Triathlons and surfing seem like they're at opposite ends of the athletic spectrum, triathlons being a little too jockish for most surfers. You know, regimented gym workouts, training schedules, the whole nine. So, how did you get into surfing? And which came first, triathlons or surfing?

Actually, there are some very natural intersections between the two: ocean swimming, variations in race course/surf conditions, a necessary and balanced physicality, skin cancer, hot chicks everywhere. I caught my first wave when my dad pushed me into a small day at Killer Dana in '65; pearled his 9' 6" balsa backyard hacker and gave it up until the summer of 1970. He and I shaped a tiny, fishy-looking thing that was the laughing stock of Blackies. It was pea soup green, and when I couldn't stand up on it, I glued on rope handles and called it a kneeboard. I didn't start triathlons until 1976. By then we were riding 7' 4" Lightening Bolts in two-foot Pacific Beach slop.

Who were strong influences on your surfing growing up?

My dad and my uncle Bill, both SanMo/Malibu guys from the early 50s. I also admired some of the guys from Newport and Huntington like Ed Farwell, John van Ornum and Scott Preiss. A bit later I was impressed with the total commitment to watermanship I found in Ed Machado and some of the guys I sailed with in college.

Where do you surf nowadays?

Mostly I surf down the street from my house in Del Mar, down the hill from my house up north, and Tables. That's it. After 20 years of being on the road 100 days a year I'm pretty happy just to surf with my son, Dane, and people I know and respect.

"I look at surfing as one of the last respites from a crazy f-ing world. I can't even imagine purposely butt-wiggling for the external validation of a few subjective judges."

Who are local surfers you really admire?

Johnny-O because he's so protective of the Del Mar groms, Mark Rastham and all the guys from the DM lifeguards because they're all very complete waterman, and Jeff Martin from Tables. You can feel the spirit of his dad, Dave, the white shark victim, out there.

Was surfing a big part of the triathlon scene when you were coming up?

A lot of the early competitors were beach people; lifeguards, college kids, Navy SEALS. Mark Allen, who won the Ironman six times, still surfs up in Santa Cruz almost every day. Colin Brown from La Jolla is a regular at big Mavs now. So, yeah there was a lot of crossover in the early 80s but as it grew and the training requirements to be competitive increased, we surfed less and less. During the 90s, a lot of us lived in the Colorado Rockies during the summer for the advantage of altitude. I used to go down to the streams just to feel the flow of water over my body.

From a sports marketing standpoint, do you think surfing can attract the ad and sponsorship dollars of mainstream companies in the same way the sport of triathlon has?

Jeez, I hope not. People have to realize that the surfing experience as we know it in modern society is very close to a tipping point. As Dave Parmenter suggests in caution -- everyone surfs. You have a fairly classic case of market forces creating desire where production is limited to what happens in the natural world. You'll find catastrophic analogies in the mining of natural resources. When the uncrowded surfing experience is gone, it cannot be replaced, except by new forms of production such as artificial reefs. These will require further commodification, which only increases demand. We either figure out how to regulate ourselves and our use patterns, or I'm afraid it will become legislated. The Blackball State--frightening shit, eh?

You turned pro in '83. What was the professional triathlete scene like back in the early 80s? Do you see any similarities between it then and professional surfing in the 70s when it was just getting off the ground?

It was a kind of Skunk Works of endurance sport. No one knew how to train properly so we simply made up for our naïveté with excessive mileage. You could intimidate another competitor when they knew that you were riding your bike 400 miles a week and running 80-90. I see a few parallels to early professional surfing. The first opportunities to "earn a living" in both triathlon and surfing were scrappy and organic. Both had failed attempts to organize the pros, and both ultimately had their image appropriated, packaged and sold by for-profit entities.

I always wonder how some professional athletes who are so uber-competitive in their own sports can mute that competitive mechanism when they do another sport. Are you one of those guys, or are you the type who is competitive with everything regardless?

Actually, I never had that killer instinct in triathlon. I wanted to go fast and achieve a level of performance, but it was more an internally-motivated drive. I've always wrestled with the nature of competitive surfing, though. Maybe it's my background in the anti-contest ethos of the early 70s. While I recognize its contributions to the sport, structured competition has altered the dynamics in the line up. That said, I can be as guilty as most other aggressive surfers--we like to ride waves so much that we can forget there are others in the water, perhaps more docile, that are doing the same.

If given the choice, would you have rather been a pro surfer or a pro triathlete in the 80s?

I look at surfing as one of the last respites from a crazy f-ing world. I can't even imagine purposely butt-wiggling for the external validation of a few subjective judges. But I'm sure there are competitive surfers who look at triathletes riding up and down PCH in their spandex and aero-position, and just shake their heads.

What was it like being there, at the epicenter, when the sport of triathlon was born?
There was a raw, palpable energy. While no one could describe it, there was a sense that these athletes were onto something unique; very colorful characters in a period when older, smarter athletes were respected. I learned a lot by watching how some of them held themselves up against the world.

You're quite the Renaissance man. Athlete, professor, lifeguard, writer, entrepreneur, scholar. Talk a little about what keeps pushing you to find new Everests to conquer.

I'm not trying to "conquer" anything, I just get bored after awhile. In some ways it's a curse. I haven't been able to sustain many interests in my life--except perhaps surfing. Some of my friends who I worked with as a firefighter paramedic in 1980 are retiring with full bennies now. I'm still in school.

Are you still doing triathlons?

You know that line from Big Wednesday when Barlowe comes back from Vietnam and turns to Matt Johnson and asks if he's been surfing much? "Only when it's necessary."

Anyone who knows you, knows you roll on a sick motor scooter. What's the story behind that thing and how'd you rig the racks on the side?

It's a full-on Bond vehicle with an oil-spraying device off the back for when guys from Carmel Valley try to follow us to the best spot of the day. Holds two boards, wetsuits and a sixer under the seat. 50 mph, 50cc and 100 miles per gallon.

If you had to pick one sport to do the rest of your life, which would it be?

Ping-Pong. I'm working on an inflatable travel table. But I'm having trouble with the legs. I tried using one off of a blow up doll I had under the bed but it kept splaying out to the side.
Posted by Recovox at 11:03 AM