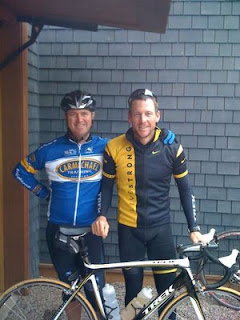 I'm less surprised that Lance broke his collarbone, and more surprised that it's the first time he's broken it in the 19 years I've been working with him. Come to think of it, he's had remarkably few injuries in his adult life. Back in 2000 he broke a vertebra in his neck in the process of flipping over a car – if memory serves – while training in the mountains before the Sydney Olympics. Beyond that, he's really only had the normal scrapes, bumps, and bruises that come with being a professional cyclist. And in typical Lance fashion, he took his recent crash in stride and looked forward instead of lamenting about what he could have done differently.

And as much respect as I have for European physicians, I glad Lance endured the long plane flight home to be treated in Austin, Texas. I'm not an expert in healthcare systems, but having been in and out of my share of hospitals around the world with my own injuries, injured athletes and kids, there's no place I'd rather be treated than in the US. I broke my collarbone in East Germany in the early 80s, and when I went to the hospital all the instruments and facilities looked they were straight out of WWII. Then my doctor came into the room and proceeded to smoke a cigarette throughout my examination. They told me I needed surgery, and I could only imagine where the metal plate was going to come from, so I gritted my teeth, got off the table and walked out. My plane ride home was a lot longer than Lance's, but probably just as painful, and in my case it turned out I didn't need surgery after all. In Lance's case, x-rays in Austin showed the fracture – and the subsequent repair - was more complicated than previously believed. But the surgery went very well and he was back on the bike within days.

I caught up with Lance last week in Aspen, Colorado. He was out there for some altitude training and to do some work on climbing. The benefit to being able to live and train in Austin, Texas and Aspen, Colorado is that Lance can really take advantage of the Live High, Train Low concept. In this training protocol, athletes go to altitude for periods lasting a few weeks at a stretch, and then return to a lower elevation or sea level for several weeks after that. While at altitude for a few weeks, the body adapts to elevation by producing more red blood cells – but the downside to staying at altitude too long is that it's difficult to put forth high-power training efforts and even harder to recover from day to day. For instance, Lance's sustainable power output on a climb at 10,000 feet is lower than his sustainable power output on European climbs that tops out at around 7,000 feet.

Going back to a lower elevation allows an athlete to take advantage of the red blood cells produced during exposure to high altitude. Lance can go back to Austin and ride at higher power outputs for sustained efforts because his body can deliver more oxygen to his working muscles. However, since there's no need for his body to continue circulating so many red blood cells now that he's closer to sea level, he gradually loses the benefits gained from being at altitude. That's why Lance and other endurance athletes alternate between spending time at higher and lower altitudes. Of course, it could just be an excuse to go to Aspen, too.

When I was with Lance, it was about three weeks since his surgery and we decided to see how he handled some time on his time trial bike. It was the first time he'd been on the bike since he broke his collarbone, and the first time he'd put that kind of pressure on it. One of the big concerns was the potential for great pain caused by road vibrations and bumps. After all, in his normal riding position on a road bike, he had his wrist and elbow to cushion some of the road shock before it reached his shoulder. But on the TT bike, the vibration goes straight from the elbow pad right up into the collarbone.

All in all Lance was on the TT bike for about 30 minutes, and while there was some minor pain, the ride was promising. While he's been doing training efforts on his road bike that build time trial power, I think he'll be back to full-throttle time trial training sessions on the TT bike very soon.

With the Giro d'Italia rapidly approaching, I'm happy with Lance's form. The broken collarbone was a setback, but from a training perspective I think he's come through it quite well. He's excited about racing in Italy, motivated to perform well for the team and himself, and eager to get back into the fray.
Posted by Recovox at 9:14 AM