Did They Come To Race Or Train? 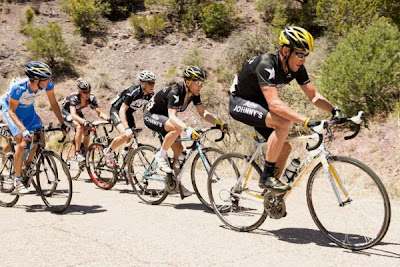 The "Mellow Johnny's" team — AKA Astana's Levi Leipheimer, Lance Armstrong and Chris Horner — just couldn't resist going for the win Wednesday at the SRAM Tour of the Gila. Leipheimer sprang from a disintegrating pack on the finish climb, taking a clear win ahead of young phenom Peter Stetina (Felt-Holowesko Partners-Garmin) and recently-rehired Chris Baldwin (Rock Racing).

Leipheimer said he had some doubts about whether the team should go for the win so early in the five-day race.

"I said to Lance coming up here, 'maybe it would be better that we try and let somebody else win, '" Leipheimer said at the finish. "And he said something that made a lot of sense, he said, 'you know what, you are a winner, go win the race and we'll figure it out.' So we'll figure it out."

It took a few miles longer than usual for the stage's traditional early break to form, as riders from Kelly Benefit Strategies, Bissell, OUCH-Maxxis and Trek-Livestrong were prominent at the front in the early miles. About 30 miles in, Kelly's pre-race favorite Andrew Bajadali crashed and left the race with a shoulder injury.

Twenty miles later, the break du jour formed, containing 15 riders, with representatives from most of the major teams (Mellow Johnny's was notably absent, but Trek-Livestrong was in there, with young Sam Bewley).

The group built a maximum lead of over three minutes, but as the pack approached the base of the Mogollon climb, the Mellow Johnny's team and a few of the other teams that were not in the break began to narrow the gap to just barely a minute as the 15 hit the first slopes of the Mogollon.

But while Beyer poured on the gas, the pack was closing to within 20 seconds on the plateau, and when the three-mile climb began in earnest, a lead group of seven riders led by Armstrong passed the remainder of the break. With Armstrong was Leipheimer, Florian Stalder, Rory Sutherland (OUCH), Baldwin, Matt Cooke (RideClean) and Stetina.

Armstrong pulled into the first mile of the climb, with Leipheimer on his wheel. With about two miles to go, as the road narrowed to a crumbly, barely paved slope, Leipheimer accelerated and quickly pulled away.

"I tried to follow Levi's move but it was just so fast," Stetina said. Stetina faded back and rode with Cooke and Baldwin for most of the climb, then attacked Baldwin in the last 300 meters. 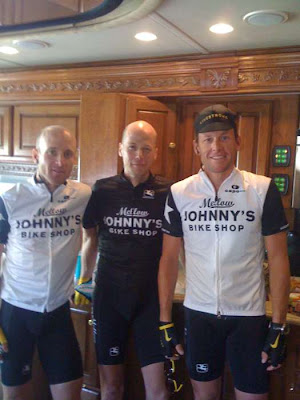