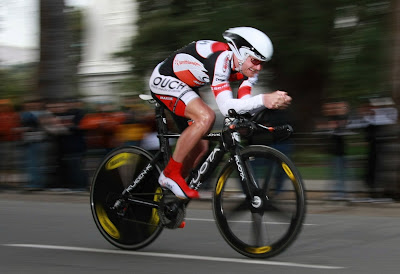 Reigning National Racing Calendar champion Rory Sutherland and stage race specialist Floyd Landis will lead the OUCH-Maxxis squad at this week's SRAM Tour of the Gila. The squad has presented a formidable lineup for the Silver City, New Mexico event and says the disappearance of other races has increased the importance of supporting the remaining events.

"With a couple stage races going away this year, every one on the calendar becomes more important," said directeur sportif Mike Tamayo. "The guys have had a little time off following Redlands and they're very ready to race."

Gila's future had been under threat due to the economic downturn, but SRAM stepped in earlier this year to ensure the event's 23rd edition went ahead. "We're really happy that SRAM stepped in to take over sponsorship," Tamayo said. "Having one of our sponsors involved with the race gives us added incentive to put in a strong performance.

The five-day race includes three challenging road races, plus an individual time trial and a criterium in Silver City. "This race favors riders like Floyd and Rory who can put in strong time trials, but also can go uphill really well," Tamayo said.