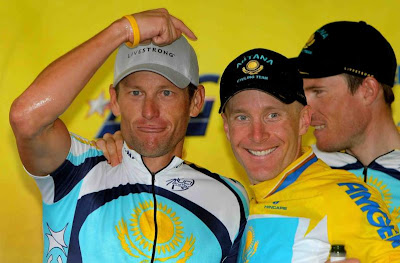 Talk of Astana's participation in America's Tour of the Gila might become a reality. The five-day stage race is scheduled to begin on Tuesday, April 29 in Silver City, New Mexico. Levi Leipheimer told us regarding his own appearance, "It's possible, but not for sure."

Talk about Astana's marquee American riders Lance Armstrong, Chris Horner and Levi Leipheimer making an appearance at the Tour of the Gila began circulating last month. The event conflicts with the team's scheduled European event at the Tour of Romandie, of which the three Americans are not registered.

"It would be cool to ride Gila," said Leipheimer, who recently won local California races Sea Otter Classic and Copperopolis. "I've done it before once and I love the desert. I'm not sure if we can do it, there are other races in Europe we might ride to prepare for the Giro d'Italia."

Although the Tour of the Gila is promising, Astana Press Officer Philippe Maertens could not confirm their attendance. "Lance has not made any decision on his plans between Castilla y León and the Giro d' Italia. We, too, have to wait. Chris Horner is scheduled for the Classics so it would surprise me if he will fly to New Mexico."

Tour of the Gila's event director Jack Brennan increased the men's field limit to 175 competitors, the biggest field in the history of the event. Brennan noted that while Astana has not registered yet, he would love to have them.
Posted by Recovox at 9:32 PM