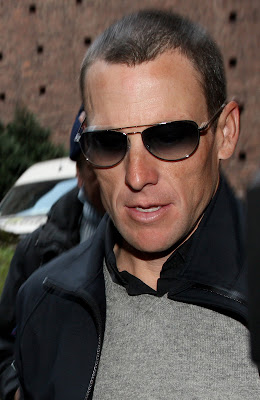 Outrageous reports yesterday coming out of France allege that I “misbehaved” during a recent unannounced drug test performed by the French government while I was training in southern France in early March. The test in question was my 24th unannounced drug test since I announced my return to cycling last fall. The first 23 of those tests were performed without any questions and all have been returned negative. This 24th test, which included a blood test, a urine test, and a test of a substantial quantity of my hair, was also negative.

I returned home that day after a long training ride to find a man chasing me as I rode up to the house. He stopped me and told me he was from the French laboratory and was here to test me. I had never heard of labs or governments doing drug testing and I had no idea who this guy was or whether he was telling the truth. I’ve been tested in-competition and out-of-competition by USADA, by WADA, by the UCI, and by testing authorities at all the events in which I have competed, but I was unaware that in France the government tests athletes and takes the position it can test any athlete residing in or visiting France. I also had never heard of a laboratory (as opposed to an anti-doping organization) sending testers to collect samples. We asked the tester for evidence of his authority. We looked at his papers but they were far from clear or impressive and we still had significant questions about who he was or for whom he worked. I was there with Johan Bruyneel and two other people. We told the tester we wanted to check with the UCI to confirm who he was and to make sure he wasn’t just some French guy with a backpack and some equipment to take my blood and urine. Johan stayed with him and in his presence called the UCI to find out what was going on. We asked if it was OK for me to run inside and shower while they made their calls and the tester said that was fine.

As soon as they completed the phone calls, which took about twenty minutes, we started the tests. Johan had confirmed with the UCI that the tester had authority from the French government to take samples. I immediately provided blood, urine and hair samples – all the samples that he requested, as he requested. All this was done within 20 minutes of returning home from my ride and finding the tester at my home.

I did not try to evade or delay the testing process that day. I had just returned from an all day training session, wasn’t sure who this French man at my home was, and as soon as the UCI confirmed that he was authorized to conduct the tests, I let him take all the samples he requested.

The drug collection forms we both signed state that we started the testing just 20 minutes after I arrived home. In addition, the form asked the tester to state if there were any irregularities or further observations from the testing process and to that he wrote “no”. I have learned that after the tests were all negative, the laboratory has now suggested that the 20 minute delay should be investigated.

I find it amazing that I’ve been tested 24 times without incident and the first test I do in France results in more outrageous allegations and negative leaks to the press. This is just another example of the improper behavior by the French laboratory and the French anti-doping organizations. I am sorry that they are disappointed that all the tests were negative, but I do not use any prohibited drugs or substances. As always, I’m available anytime and anywhere to be tested. It is this sort of behavior that hurts the entire system and causes me and many other athletes to call for reforms in general and an improvement in the conduct of French laboratories and authorities in particular.
Posted by Recovox at 11:16 AM