Ivan Basso back on top after three years 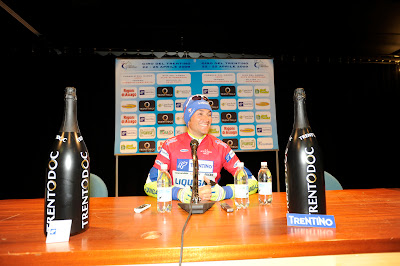 Ivan Basso is back at the top after a three-year absence due to his link in 2006's Operación Puerto doping investigation. The team Liquigas Italian won the Giro del Trentino overall Saturday in Pejo Fonti, Italy, two weeks before he will attempt to win his second Giro d'Italia.

"I am happy. It comes near my big objective and so it gives me a little bit more assurance," said Basso to Cyclingnews.

Basso's last race win was the overall victory at the 2006 Giro d'Italia. He won three stages and finished ahead in the classification by 9:18 over José Enrique Gutierrez. He served a two-year suspension for links to Spanish doctor Eufemiano Fuentes, and only returned to racing at the end of last year's season.

The three- week Giro d'Italia stage race is once again his objective. Basso seeks to win this year's edition, and the four-day Giro del Trentino gave him another chance to see his rivals before the main event.

"I got a good look, but these guys all know how to arrive at the Giro in form anyway. There will be some riders that we have not yet seen, guys who will come up as contenders at the Giro d'Italia."

Prior to the Giro d'Italia, Basso faces once last race: Sunday's Liège-Bastogne-Liège. He was scheduled to travel with teammate Franco Pellizotti by private airplane Saturday night to Belgium.

"I am not kidding myself, I am not a machine and to contend for Liège victory is difficult – it is very different course. There are many riders who have prepared specifically for that one day."

Liège-Bastogne-Liège is one of cycling's five Monuments. It is 261-kilometres long and features 11 côtes (climbs). Basso's last participation was in 2006, he finished 10th. He placed third in 2002.
Posted by Recovox at 9:52 PM