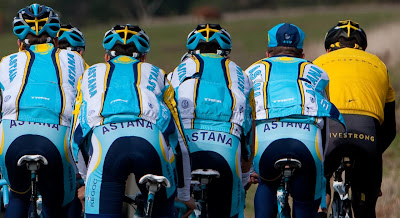 Any plans for Team Astana to compete in this week's SRAM Tour of the Gila appear to have been quashed by the UCI's decision to enforce a rule barring ProTour teams from competing in lower-tier events.

Horner told VeloNews on Monday that Astana's Levi Leipheimer and Lance Armstrong will not compete in the New Mexico race because of the UCI's stance. Armstrong spokesman Mark Higgins told VeloNews over the weekend that Armstrong would not race the Gila.

Horner decided earlier this month that he couldn't do the race because of injuries.

"The team didn’t get into Gila ... as always with Lance, the UCI is on top of everything that he’s doing," Horner said.

USA Cycling spokesman Andy Lee said his understanding was that the UCI was enforcing its rule 2.1009 (see rule below). Lee emphasized that it is a UCI rule, not a USA Cycling rule.

"It's not our place to waive the rule or enforce it," Lee said. "From what we've been told they (the UCI) are choosing to enforce that rule in this case."

Tour of the Gila director Jack Brennan said he hadn't heard anything but rumors about the situation. "I think that's really bad ... I can see the rule, but let's ease up now," he said.

The rule barring UCI pro teams from "National" events is rarely, if ever, enforced in the U.S., where the handful of U.S.-based ProTour riders routinely join nearby races, usually alone or with a handful of teammates. Leipheimer raced at the Sea Otter Classic earlier this month and he and Horner raced Oregon's Cascade Classic last summer. Cervelo's Ted King won the Marblehead road race in Massachusetts last month.

It's not clear whether the UCI rule, if enforced at the Gila, would prohibit BMC from starting. BMC, like Cervelo, is a UCI-registered Continental Professional team.

In an interview earlier this month, Horner said Astana director Johan Bruyneel wanted Horner, Armstrong and Leipheimer to race the Gila as a last preparation before next month's Giro d'Italia.

"(The Gila)'s perfect — it’s not too hard of racing so we can leave fresh, the weather is good, the altitude is perfect. We could end up showing up there with a really good team. It could be funny to see us at Gila, with a big squad," Horner said.

On Monday, Horner said the enforcement of the UCI rule was "wrong."

"It’s a pro race, you should be allowed to race your bike. If we are skipping ProTour races to do a non-ProTour event, then it makes sense. But you should never, never, never just not allow a rider to race his bike. ... every man should be afforded the right to work."

Horner said he, Leipheimer and Armstrong are planning to train for a week in Aspen, Colorado, before heading to Italy.

SRAM, the New Mexico event's title sponsor, is holding a news conference on the eve of the race Tuesday, and the company is promising "perhaps one or two surprises."

The company, which sponsors Astana, stepped in earlier this spring to sponsor of the race, which had been on the verge of cancellation for lack of sponsorship.