Chris Horner out of Basque Tour 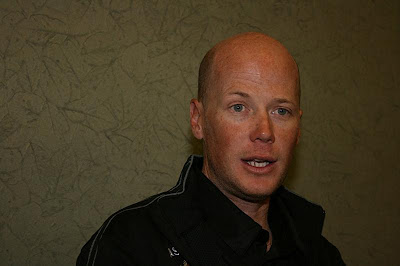 One day Astana's Alberto Contador took the lead in the Basque Tour thanks to some heroic pace-setting by his American teammate Chris Horner. The next, he had to look away from a horrifying crash that took Horner out of the race.

It all started when fellow Astana rider Daniel Navarro snapped his chain on the descent of the Urikola 37km into Thursday's stage four. Navarro lost control, crashed, and Horner was unable to avoid him. The American flew into the guard rail on the side of the road, injuring his right shoulder. While Horner was rushed to a hospital for X-rays, Navarro was able to re-mount and continue.

Post-race radiographs did not reveal any fractures to Horner's injured shoulder, but further examinations will need to be done once the initial swelling goes down in a few days, according to the team.

Contador said he couldn't look as he continued past his fallen teammates. "It has not been a good day for the team," said Contador. "I was right behind them and I couldn't look. Though if Horner only has a fracture, we're lucky."

Contador said that the team will feel Horner's absence as it tries to defend his overall lead in the Tour, which ends on Saturday. "Any team would notice the loss of a man of his quality, but I believe that we have a sufficiently strong squad to control the situation, and there are other riders at eight seconds in the overall that also want to do the race."