Boasson Hagen was part of the 34-rider move that went clear after the Cervelo team split the peloton. He then joined Aleksandr Kuschynski (Liquigas) on the second ascent of the Kemmelberg climb and beat the Belarus rider with a long but powerful sprint. Australia's Matt Goss (Saxo Bank) was third.

Mark Cavendish (Columbia) was the big favourite for the race but he punctured very early on, inside the first 10 kilometres.

With crosswinds cutting across the riders from the left for the first 40 kilometres, an aggressive start was predicted. Whether it was deliberate or coincidental, the front portion of the peloton seized the opportunity to split the race.

The attacks started, with the Cervelo team putting into practice the same tactics they used in the Tour of Qatar to splinter the race.

Just as the 34-rider group went clear, Cavendish was rejoining the back part of the bunch. The Columbia rider did settle into a powerful-looking second group but the gap never went below a minute as the riders in front pressed on.

It was a frantic first hour's racing. The race was effectively sorted out in that hour as the bunch split to pieces. There were echelons of six, eight, ten riders all over the road as the wind caused havoc.

In front, Cervelo had almost all their team represented. Columbia had four riders - Boasson Hagen, George Hincapie, Bernhard Eisel and Marcus Burghardt. Quick Step had just one - Tom Boonen. His race was ruined by two punctures - the first which forced him to drop from group one to group two. The British riders were well represented too - with Jeremy Hunt and Daniel Lloyd (Cervelo) and Bradley Wiggins (Garmin-Slipstream) in there.

It was obvious from a very early stage that the second group was not going to catch the leaders, even though the gap hovered around the four-minute mark for almost 50 kilometres.

On the approach to the climbs of the Rodeberg, Monteberg and Kemmelberg for the first time Cofidis lifted the pace to try to close the gap, to little effect. Cavendish and Boonen were resigned to riding in from there.

At one point, the wind made riding extremely difficult, even at the front. Two Rabobank riders, Graeme Brown and Mat Hayman, and Wiggins went down. Wiggins and Hayman chased to get back on.

Up front, the group split in two, with Liquigas forcing the pace. Robbie McEwen bridged across, sensing his chance of a sprint win was slipping away.

Kuschynski attacked on the second approach to the Kemmelberg, and Boasson Hagen powered up the climb behind him. The Norwegian joined the Belarussian with about 30 kilometres to go. The pair stretched their lead, with Wiggins working hard on the front of the chase group, for his team-mate Chris Sutton, to try to bring them back.

Three riders - Matt Goss, Mat Hayman and Andreas Klier - mounted a spirited chase in the final ten kilometres, but Boasson Hagen and Kuschynski were free to fight out the finish.

In the sprint, Boasson Hagen went very early, but had the power to hold off his rival to net the biggest win of his career so far. He's the second Norwegian to win Ghent-Wevelgem, after Thor Hushovd. 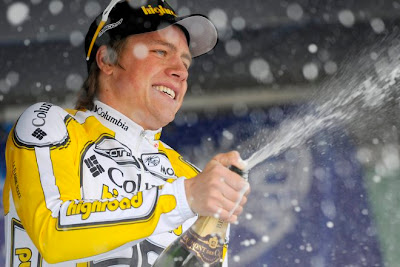