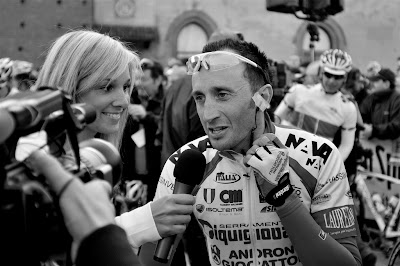 The coalition of racing in Holland and one of that nation's best-known beers is an enduring one - since 1966, in fact. The Amstel Gold Race, named after the beer of the same name, has been a staple of the April cycling diet for 44 years, and this year's edition possesses its own malty flavour.

That flavour is characterised by the 31 bergs littered over the 258.6 kilometres of narrow roads which will be packed with the Dutch cycling faithful on Sunday.

"I like it a lot because of the crazy roads. There are parts where two riders have trouble riding side by side because they are so small. You have to know the roads well.

"Flanders, Roubaix and Amstel are very particular races that you will never see anywhere else in the world. It makes the race very intriguing and fun for the fans.

"In the finale the roads are up and down. The Cauberg comes each time in the three final circuits; it leaves you with no energy. The hard climb is the 'Antenna climb' or the Eyserbosweg. The year I won, I attacked there and every year the race really develops from there. It is short, but it starts off with a steep gradient of around 20 percent.

"The favourites will be Damiano Cunego, Davide Rebellin, Thomas Dekker and the Schleck brothers - particularly Fränk - who are all suited to the Ardennes races."

The Eyserbosweg, Cauberg and Wolfsberg are just three of the climbs which have made the Amstel so legendary, despite its relatively new status amongst the Ardennes Classics.

They're suited to the likes of Alejandro Valverde, defending champion Damiano Cunego and 2006 winner Fränk Schleck. It's no wonder that these riders are amongst the favourites to take the win after the final ascent of the Cauberg, having proven themselves on this type of terrain in seasons past.

They're not the only ones to carry the 'fancied' tag, however. Columbia-Highroad's Kim Kirchen is back after a long injury layoff, and he'll be supported by Michael Rogers. Spain's Samuel Sanchez may take the place of retired Italian legend Paolo Bettini - both have Olympic road race crowns to their name, and the Euskaltel-Euskadi rider has shown his cards with a solid performance in the Vuelta al País Vasco earlier this month.

Robert Gesink is a classy climber who has shown he's more than capable of dictating proceedings at the pointy end of a race. With no Michael Boogerd in the Rabobank lineup these days, he could be the Dutch team's 'go to' man with an able support squad that contains Juan Antonio Flecha and Nick Nuyens.

Despite there being no cobbles in the race parcours, it's an attritional experience for riders, with the short, sharp and energy-sapping bergs guaranteed to splinter the field in the final 30 kiloometres.

It's here that the race normally comes to life - the chance of a break succeeding beyond the final fifth is slim. If it makes that distance, the peloton is sure to swallow it up somewhere around the Eyserbosweg, with just three climbs remaining.

With this in mind, look out for Aussie duo Heinrich Haussler and Matthew Lloyd. Haussler has the form - seen in Milano-Sanremo, Ronde Van Vlaanderen and Paris-Roubaix - horsepower and speed, while Lloyd is an elegant climber capable of making a mark against the likes of Danilo Di Luca and Davide Rebellin, which he did during the 2008 season. The smart money would put a sneaky quid or two on Silence-Lotto's diminuitive dark horse.

Speaking of Rebellin, the evergreen Italian veteran returns to ride in the Ardennes and Holland, and judging by his performance in the Ruta Del Sol earlier this season, he'll be as tough as ever on the punchy parcours he's proven to be a master of on so many occasions.
Posted by Recovox at 8:18 PM