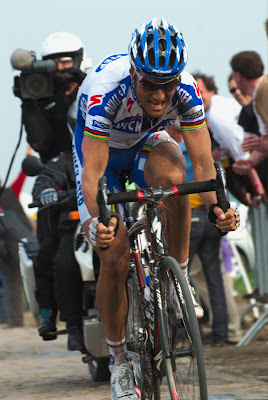 This year's edition of Paris-Roubaix was one of the most thrilling bike races in a very long time. The people's passion for the riders and the event was clearly on display, witnessed by many tens of thousands of spectators along the race route and millions of viewers around the world. Tom Boonen put on a display of power, tenacity, and intimidation that left no doubt that he is the master of the cobbles. His hand to hand combat with Filippo Pozzato was a beautiful display of how difficult and gorgeous bicycle racing truly is. Once the winning breakaway was established it seemed as if it was every man for himself the last 15 miles of the race. Interestingly the finale contained one team with two riders. Silence Lotto had Johan Van Summeran and Lief Hoste, Team Katusha had Filippo Pozzato. Quickstep of course had Tom Boonen, Cervelo had Thor Hushovd, and Rabobank had Juan Antonio Flecha.

Boonen was clearly the most aggressive, attacking to establish the breakaway and keeping the pressure on whenever the pace slowed. Flecha did not do much work in the breakaway, but Pozzato seemed to be the most willing to work with Boonen. The "man of the match" was Johan Van Summeran who was on the ride of his life giving Lief Hoste a great chance to win. Hushovd seeing that Flecha and Hoste were saving themselves by not working threw in a scintillating attack just before a treacherous corner, a big slice of justice was served up to Flecha who went down crashing Hoste and Van Summeran in the process.

To imagine you are the team manager at Silence-Lotto and one moment you have the best chance to win the greatest one day race in the world and the next moment both of your riders are laid out on the cobble, that is in the essence of heart-ache that Paris-Roubaix serves every year. One corner later it was Hushovd's turn to feel the wraith of the Queen of Classics when he came to grief trying to follow what turned out to be the winning acceleration by Tom Boonen.

Pozzato was the only rider besides Boonen not to crash in the melee of the final sector of hard cobbles. And that gave us an opportunity to witness what makes bike racing so compelling. Two great champions pursued each other through the gates of hell to the ends of the earth, Tom Boonen has to be commended for going as deep as he has ever gone to hold off a formidable foe in the form of Filippo Pozzato.

Mile after mile, those two stayed locked in an epic battle to the delight of the thousands of spectators who were pitched into a delirium of ecstatic joy. There was more disappointment for George Hincapie as he flatted at the worst possible moment. George is getting into the twilight of his career but his disappointment this year has made him vow to return at least once more to compete in the infernal roads of Paris-Roubaix. If every bicycle race was like this past Sunday's Paris-Roubaix, people would not need to watch any other sport.
Posted by Recovox at 9:54 AM