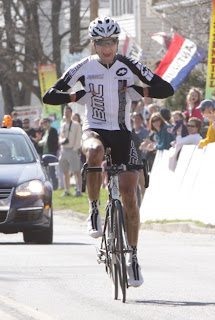 Having maintained a solo attack for most of the race, Scott Nydam (BMC) enjoyed a satisfying victory at the Tour of Battenkill-Roubaix Invitational. After spending nearly 175km off the front, Nydam muscled his way to the finish line more than two minutes ahead of second-placed Karl Menzies (OUCH p/b Maxxis) and third-placed Francois Parisien (Team Planet Energy).

"I'm stoked," Nydam told us. "It was a very satisfying win. I went into this race hoping to win and was envisioning going to the line alone. This win felt like it was a long time coming and everything came together today. I knew where to use my efforts on the course and how to maintain my speed on the climbs, descents and in the dirt."

The main group was reduced to just 25 riders by the end of the race. Menzies bridged across to Nydam's lone chaser, Parisien, and used his speed to win the two-up sprint for second place. "Obviously winning was our number one goal but we rode the race as best we could," said Mike Tamayo, OUCH p/b Maxxis directeur sportif. "We raced hard and BMC raced hard too. Hats go off to them for a great race. My guys really left it all out there today and they should be proud of that."

The men's 160-rider peloton anxiously lined up to start one of the longest and toughest events held on American soil, literally. Nearly 40km of the total 200km road race was held on New York State dirt roads. Blue skies made the otherwise epic race tolerable because the dirt roads, combined with undulating terrain and strong winds, caused the large field to dwindle to 62 by the finish.

"It was a great course, a really hard course and riders made a big deal of the dirt," said Tamayo. "It was the climbs that made it hard. The dirt brought the handling skills factor out but the attrition came from the climbs."

Nydam initiated his early move with Bobby Lea (OUCH p/b Maxxis) in tow on the first dirt section, 16km into the lengthy event. The pair worked together for more than 100km and gained a maximum of five minutes on the peloton. "Bobby did a great job today," explained Tamayo. "Once he got caught he stayed in the race and did a lot of work for the team today."

Lea lost Nydam's wheel before the start of the second lap and was joined by Parisien. The pair of chasers worked together to try to bring Nydam back but the solo leader continued to pick up another valuable minute. "When I started the second lap I got radio bits that some attacks were going and a chase group had formed," Nydam said. "But I still had a three-minute lead and at that point my thought was to maximize the amount of time off the front to give my teammates a free ride for as long as possible."

Behind Nydam and his chasers, Bissell and Team Type 1 lead the bid to bring back the escaped riders. But, the time damage to Nydam was too hefty and the race continued for second place. "Once the chase was reabsorbed I knew there was going to be some time of indecision," Nydam said. "It was a long enough and hard enough race to really work into peoples heads."

Lea was reabsorbed into the bunch where his OUCH p/b Maxxis teammates assumed responsibility at the front. "We really relied on a rider like Tim Johnson to use is cross power over the dirt sections to bring back Parisien," Tamayo said. "That's where the race of attrition started to take over and ten riders fell off the back each time we went over another climb."

Menzies attacked the small chase group that included Sean Milne (Team Type 1) and the previous day's winner Chad Beyer (BMC) to bridged across to Parisien. "Karl got away on one of the descents wit eight kilometres to go," Tamayo said. "Overall it was a good bike racing, an epic day and a great ride. Tactical race and attrition took over at the end."
Posted by Recovox at 8:08 PM