A look back at the 2002 Gent-Wevelgem 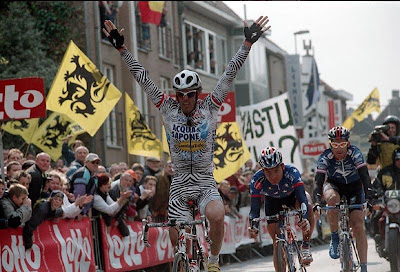 Each of Mario Cipollini's 191 career victories can be attributed to his undeniably brilliant turn of speed over the final 200 meters. On an a windy, overcast spring day in Belgium, however, the Lion King struck gold in a fashion never before or after duplicated in his career: Cipollini uncharacteristically went out on the attack and won the 2002 edition of Gent-Wevelgem from a five-man break, the only race in Cipollini's lengthy palmares not won in a field sprint.

Cipollini found himself without teammates in a select group of 21 riders who climbed the Kemmelberg for the races's second and final time. Four riders, defending champion George Hincapie, Fred Rodriguez, Hendrik Van Dyck and Martin Hvastija managed to separate themselves from the lead group over the top of the Kemmelberg and held a slim, 10 second gap after the descent.

Nobody expected what transpired next, as Cipollini put in a dramatic acceleration to carry him from last position in the chase group clear across to the break. Cipollini immediately jumped into the rotation, helping the winning move's gap extend from a tenuous 10 seconds to a comfortable 50 second margin in only several kilometers.

Victory was a foregone conclusion for Cipollini, despite the flurry of attacks in the closing eight kilometers.

"I wanted to do something special and show that I can do more than just sprinting," said Cipollini. "I am no superman, but after my win in Sanremo, I knew there was still more."

In addition to finally claiming that elusive victory in Milano-Sanremo during the 2002 season, Cipollini would strike gold in Belgium late in the season, winning a world road championship in Zolder.
Posted by Recovox at 6:06 PM