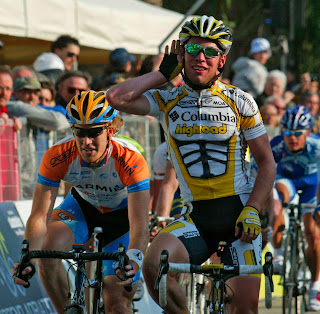 Mark Cavendish (Columbia-Highroad) will get a good indication of his form ahead of the Giro d'Italia this week at Switzerland's Tour de Romandie. Cavendish won two stages at Italy's Grand Tour last year, before claiming four wins at the Tour de France.

"It's an important race for Mark because it's his last before the Giro d'Italia, but there's no pressure here," said team sports director Tristan Hoffman. "If he gets a win, then that's great. But really we see Romandie as part of his build-up for Italy, one last test before the Giro."

The former T-Mobile squad is to practice setting up sprint finishes for Milan-Sanremo winner Cavendish. Other riders in Columbia-Highroad's squad will be preparing for July's Tour.

Tony Martin (Columbia-Highroad) is hoping to use the event to develop his riding ahead of the Tour. The German rider is particularly keen on seeing how he performs in the six day event's prologue and team time trial.

"Romandie is good training for me for the Tour de France, particularly since there's a team time trial, my first this year," he said. "Then I want to do well in the prologue, because it's 3.1 kilometres long which is a good distance for me. Finally I want to test my condition in the mountains and see if I can improve there.

"Some of the riders in Romandie are doing the Tour as well, so on the flatter stages we want to practice how we do the last three kilometres with Mark," Martin added. "My only complaint is there's no long individual time trial this year, and it would be better for me if there were. It's not so mountainous this time, though, as it has been some years, which is a plus. That way if we get a good result in the team time trial, we have a good chance of staying ahead."

The Tour of Romandie starts in Switzerland today and runs through to Sunday.
Posted by Recovox at 8:40 PM