Lance Has Good News and Even Better News 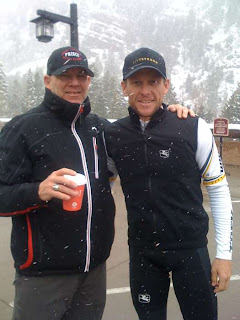 Lance Armstrong has received a couple of pieces of very good news this week. Both of which were ironically rather underreported in the popular media. Huge headlines across the general media in the past few weeks heralded Lance's misfortune. The first story was his broken collarbone as a result of a high-speed crash at a stage race in Spain called Casillta Y Leon. Although fans were denied a head to head battle between Lance and his teammate Alberto Contador the media seemed delighted to have a news item involving Lance Armstrong possibly jeopardizing his chances at his comeback at the Giro d'italia and the Tour De France.

I personally have never been an alarmist and having broken my own collarbone witnessing nearly every cyclist I know being forced to recuperate from the same injury, I was fairly certain that Lance could recuperate in plenty of time to start the Giro d'Italia. In spite of my confidence and attempts to reassure people I got the impression that everyone was somehow convinced Lance's season was over.

I happen to be in Aspen recently to enjoy one last weekend of skiing that was quite pleasant in spite of hammering snow. Skiing when its snowing is one thing but for Lance to be training in these miserable conditions for 5 hours; not quite so pleasant, but essential to win the Giro or Tour. I met with Lance for dinner along with his delightful entourage to catch up.

It was quite refreshing to be able to ask Lance face to face, How's the collarbone champ? No problem, Lance answered. Apparently the surgery performed on the broken bone enabled Lance to be back on his bike training within a few days and he reassured me that since then his training had been going great. The strange thing about the whole episode was that while the bad news (that he crashed and broke his collarbone) was widely reported the good news (that he had it fixed and was training again) hardly saw the light of day.

The second episode of misfortune for Lance not surprisingly came from France. During a routine out of competition drug test performed by the AFLD, which is the laboratory in charge of testing drug samples in France, Lance allegedly violated the exact letter of the anti-doping procedure by leaving the sight of the tester. The ensuing panic and worldwide headlines lead people to believe that Lance would be banned from racing in France, which was actually never a part of any official discussion. In fact there was no procedure violation because Lance had asked permission of the tester to allow him to take a shower as he had just finished a long training ride and time was needed to verify the identity of the individual who was to carry out the test.

The media was quick to broadcast near and far of the report from the French anti-doping authorities that Lance may have violated the testing protocol. These incendiary comments by the AFLD provided ample fodder for scintillating headlines guaranteed to sell the news. To give credit to the media most credible sources also reported that the samples that were tested were all 100 percent negative for drugs. At the end of last week the AFLD issued a statement saying there would be no further investigation necessary and no sanctions imposed whatsoever. Funny that you had to search high and low for the good side of the story. Lost in the melee of the dirty laundry that passes for credible news was that Lance has been completely exonerated and is free to race the Tour of Gila, Giro D'italia and the big daddy of them all the Tour De France. Will there ever be a day when the good news takes up as much space in the media as the bad? Or is it human nature to wallow in the lowest common denominator? I hope the good news that Lance will be at the Tour baring any other broken collarbones will be a heralded just as loudly by the popular media and perhaps there is our silver lining. And will remind people how remarkable Lance's comeback continues to be.
Posted by Recovox at 11:29 AM