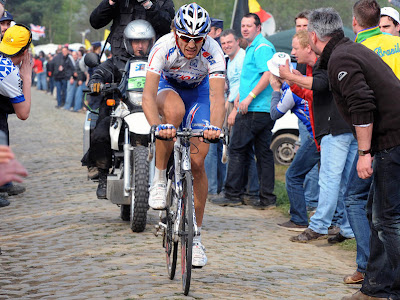 Italian Filippo Pozzato admitted defeat to a triumphant Tom Boonen on Sunday as the Flemish-speaking Belgian star powered to his third victory in the prestigious Paris-Roubaix classic.

However the Italian, who races for the Russian-backed Katusha team, was less gracious about Spaniard Juan Antonio Flecha and the Flemish fans who he said spat on him and threw beer in his face as he chased Boonen down in a thrilling end to the race.

Flecha was among a six-man group of frontrunners that emerged shortly after the 213km mark of the 259km cobblestoned epic known ominously as the 'Hell of the North'.

But with less than 18km to race the Spaniard who rides for Rabobank came crashing down on a left hand corner.

Pozzato avoided the carnage and Boonen narrowly did so but the Italian had little sympathy for Flecha, whose bid for victory virtually ended there before he came over the finish in sixth place.

"He fell for nothing and almost caused disaster," said Pozzato, who in the closing 15km battled in vain to close a 15-sec gap to Boonen before finally coming second at 47sec behind.

"But before that he was riding badly anyway. He wasn't taking any share of the relays in the bunch."

After another dramatic crash by race contender Thor Hushovd moments later, Pozzato was left on his own trying to chase Boonen down in the closing kilometres.

The Italian's quest was not made any easier by the fact he was racing through a throng of many flag-waving Flemish supporters of Boonen, some of whom gave him more abuse than he'd hoped for.

"I got spat on and beer was thrown at me. It's not very nice, but what can you do about a few imbeciles?" said Pozzato, who thankfully had kinder words for Boonen.

"He deserved the win, there's nothing you can say about it. I had to try and close the gap to him on my own after Flecha and Hushovd crashed but he was just too strong for me."

Ten people were hurt, three of them seriously, Sunday, when a motorbike crashed into fans lining the route of the classic Paris-Roubaix cycling race in northern France, emergency services said.

"A motorbike from the race organisation struck the crowd," a spokesman for Lille emergency services told AFP, saying he had no further details on the extent of the injuries.

Two rescue helicopters and a dozen fire engines were at the scene, he added.
Posted by Recovox at 6:26 PM