Luke Bell - The Strains And Pains 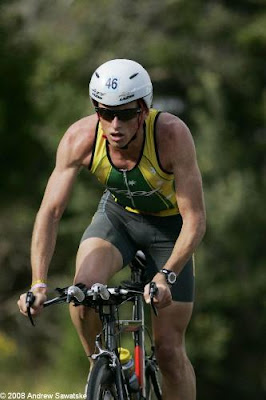 Well what do you do, what was meant to be a good training hit out turned into a disaster as I am now sitting on the couch resting a slight strain on my right VMO. The Superfrog was a fun low key race. I had a nice swim catching a couple of waves into shore and took it easy for the first half of the bike before Lars and 'Big Chris' - i only call him that as he is bigger than Macca and Legh caught back up. We then continued through to transition or at least I made sure I had all nutrition down in the last few K's loosing about 20secs.

Exiting onto the run I had to make up about 20secs however I was quite confident that things should be fine, rolling through the first 2miles of beach running in 11mins I was comfortable however as we exited the beach in the soft sand I tweaked my leg resulting in a slight strain, nothing major however it did mean i had to limp home at quite are different pace over the next 11miles - The pace did not bother me it was more the fronting up next week at Cal 70.3 (the main reason for the trip over)
This week will be lots of R and R and fingers crossed it ends the same way as a couple of years back when I turned up and strained a calf resulting in a win and course record.

I will post mid week and let you know what direction we are heading - fingers crossed.