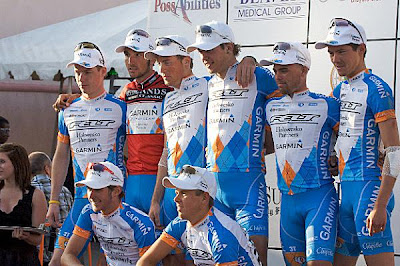 The Garmin-Slipstream under-23 development team (Garmin-Holoweko Partners-Felt) did what possibly no amateur team has ever accomplished last weekend: it won the teams classification at the prestigious North American stage race, the Redlands Bicycle Classic. It showed that this "feeder" squad for the Garmin ProTour is producing riders capable of becoming top professionals. Need more proof? One rider has already signed on to step up to the big leagues for 2010: Peter Stetina.

Stetina, 22, has been with the organisation since it began six years ago. In 2008, he became US espoir time trial champion, held the yellow jersey in the Tour de l'Avenir and was best young rider in the Cascade Classic and Tour of Utah. At Redlands, he placed third on the first stage and finished 11th overall.

All of this was accomplished while going up against a field stacked with seasoned domestic professionals.

Slipstream owner Jonathan Vaughters was as proud as any father could be of his "baby", a team which grew out of the junior development squad Team 5280 which he began following his retirement from professional cycling. Now directed by Chann McRae, the team has grown to be a true feeder team for the Garmin-Slipstream ProTour squad.

"I don't think it has ever happened where an amateur team has won the teams classification at Redlands. Our guys were in the hunt the entire race. It speaks to the depth of talent on the team and how much they've raised their game."

According to Vaughters, the riders have one unifying goal which has motivated them to train and race at a level that is competitive with the top domestic US professional teams: "They're working as a team and are showing they're all deserving of a spot on the ProTour team."

For Vaughters, the team's success is the fruition of years of effort in trying to bring up the level of competition in young riders. "Slipstream started out as an organization to help out young riders. I remember how much of a struggle it was to put together six riders who had any chance at becoming pros. It's great to see we've been able to convince a couple of them to keep with it.

"The problem now is we have ten U23 riders who are all deserving of a pro contract."

Vaughters is certain that most of the riders who are ready to turn professional will be offered contracts either with his team or with another ProTour or Professional Continental squad. The team has fulfilled every expectation he had for the program when he started it and more.

"If I had my way, the ProTour team would run itself and I would be able to spend more time with the U23's. When they actually listen to you and do the work, you can see so much improvement - it's really gratifying to see these kids turn out. With the ProTour guys you're just tweaking things and seeing small improvements because they're already at a high level."
Posted by Recovox at 9:54 PM