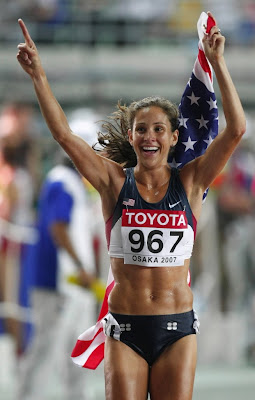 On July 26, 2006, in just her second 10,000-meter race, Kara Goucher became the second-fastest American ever at the distance, placing third in Helsinki in 31:17.12. Among Americans, only Deena Kastor has run faster. It was part of an amazing season that saw Goucher set personal bests at four distances… After years of mutual injury and frustration, the Gouchers moved from Boulder to Portland, Oregon, in the fall of 2004, where both Kara and her husband, Adam, have flourished …Goucher established herself as one of the top collegiate cross country runners while at Colorado. She was undefeated for the entire 1999 cross country season until the NCAA Championships, where she finished ninth... she returned in 2000 to win her second Big 12 cross country championship, the NCAA title and then won both the 3000 and 5000m at the NCAA Championships... was the only collegiate runner in the 5000m finals at the 2000 Olympic Trials, where she finished 8th... Formerly Kara Grgas-Wheeler, she started running in the seventh grade because she wanted to win an award at her junior high school... to get the award, she needed academics, arts and athletics... she chose cross country because they didn’t make cuts...was a psychology major at Colorado... In 2001, she married fellow Colorado alum, distances runner Adam Goucher.
Posted by Recovox at 9:45 AM