Chris Horner Back And Ready To Race 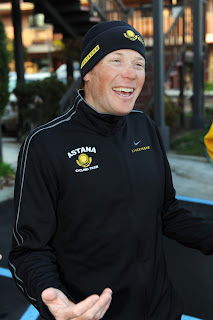 Chris Horner has been out of the spotlight for a number of weeks now....we grabbed a quick moment with him on Thursday, April 2, 2009.

Cathy: Where the heck have you been, Horner?

Chris: I’m surviving! I’m getting ready to head back to Europe. I’ve had a broken knee. But now it’s all healed up and I’m going back to my job. So I’m going to the Pais Vasco, the Classics, Romandie and the Giro. And I think I’ve got a little bit of form!

Great weather down in San Diego lately-so you’ve had some good training?

Yeah, I’ve been ripping it up. Now I’ve been up here in Bend (Oregon) for two days to see my kids real quick before I head to Europe. I was 6 weeks in SD and now I'll be two months in Europe, so I didn’t want that much time to go by without seeing my kids. Pretty nice two days here. Luckily I was able to get in some training. I rode in the rain today and it was about 40F but that only lasted about half an hour. Then I had cross-winds all day. I think I’ve got some good form!

You broke your knee at Tour of California in a crash?

Right, stage 3. I didn’t break any bones. The knee just bruised the bones and of course it swelled up. I was having some trouble walking and then of course riding on it for six more days after it happened just put a lot of pressure on it. Basically after the race was over I couldn’t even bend the knee.

You realized it was broken during the race or just that something was going on?

I knew something major was going on. Absolutely. But the Tour of California was really hard and we had Levi who was of course in position to win it. I didn’t think he needed one less guy! I knew I wasn’t doing permanent damage to the knee. I knew I was hurting it more but not doing permanent damage so I was ok with that. I talked with the team about it, told them I was sure I could get through the race, but I knew I would have to rearrange my schedule for the races right after that. We took out Paris-Nice. I had to have two weeks completely off the bike. Then I was walking fine and back on the bike but I couldn’t train hard at that point. After that three weeks I still needed 2-3 weeks of good training to get back to competition fitness so that’s where I am now. The team saw the importance of Tour of California and what was happening there with the excitement of Lance being there and the huge crowds, and of course Levi winning it. So it was decided we would push the limit on what the knee could do and then I’d be on vacation after that!

Is the only schedule change you had to make Paris-Nice?

Yes, so it didn’t change too much for me. It looks like things changed a lot for me because I haven’t raced for a long time now. Originally I would have had 10 days after the Tour of California in San Diego, fly to Paris-Nice and do that race, fly back to San Diego for three weeks and then go back for Pais Vasco. When you take a big race like Paris-Nice out of the racing block it leaves a big hole in the schedule.

So you and Levi were both riding with big injuries in Tour of California and both had to miss Paris-Nice because of those injuries.

Yeah, that’s right. But we weren’t talking much about my knee. You weren’t even writing about it!

Correct! But I knew when I said good-bye to you in San Diego on the Sunday night when it was over that you were hurting and needed to get off your feet.

I couldn’t even bend my knee that night. It literally was so swollen from the knee down to the calf that it wouldn’t bend. And the calf muscles would swell up so tight that it felt like a piece of wood. It was pretty bad, but Dr. Dag kept checking on me twice a day at least and giving me his opinions, and I used my own gut feelings about it too. I thought the knee could go the distance. In all honestly the race was one day too long for my knee but at least I was near home when it was all over! Now it’s all done and healed and I am in very, very good condition so I think after a couple of races I’ll be in top condition to compete.

Yep, I fly out Friday morning, straight to Basque Country and to work on Monday. I fly directly to the race. In general I don’t spend much time at my Spanish home, only for a short period of time. I prefer to be at home with my girlfriend or in Bend with my kids. I am gone for awhile now, through the Giro, then I will go back home.
Posted by Recovox at 10:37 AM