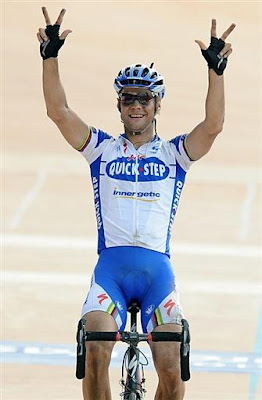 Tom Boonen rode his way into history with a magnificent third victory in Paris-Roubaix thanks to an uncanny ability to avoid crashes in the critical final kilometres. He joined fellow Belgians Eddy Merckx, Johan Museeuw and Rik Val Looy on the list of riders who have won the "Hell of the North" three times.

The Quick Step star was in a lead group of six favourites which included a surprise appearance by Thor Hushovd (Cervelo TestTeam), along with Leif Hoste, Johan Vansummeren (Silence-Lotto), Juan Antonio Flecha (Rabobank), and Filippo Pozzato (Katusha). The six worked together until an unbelievable string of events unfolded with 30km to go which clearly demonstrated Boonen was riding under a lucky star.

Boonen's first Easter miracle came when he followed an attack by Hushovd. The pair were fortunate to hold a few metres advantage coming into sector four of the pavé, Le Carrefour de l'Arbre, as the gods of Paris-Roubaix were about to smote the chasing quartet.

Flecha, chasing after the two leaders, came into the dusty turn at the entrance to the sector too hot, and took a devastating tumble. Hoste, blind to the fallen Spaniard a few metres behind, came into the turn straight into Flecha, and flew head over heels onto the ground. Vansummeren, with lightning reflexes, made a dramatic power-slide stop to assist his captain while Pozzato was forced to brake to avoid the fallen riders before setting off in pursuit of the leaders.

Seconds later Boonen's next bit of luck came as he led the Norwegian through the sector. The god of thunder was no match for the demons of the pavé, and Hushovd crashed on the ground, leaving 'Tomeke' to solo to victory.

"I didn't see Thor crash," Boonen said. "This was a fantastic win. It wasn't easy, with riders like Flecha and the Lottos in the break."

Hushovd's mistake cost him an excellent chance at victory, as he is undoubtedly the stronger sprinter of the two. "I couldn't win because of the crash. My arm is still impeded from another crash and I was shaking a bit, but I don't know what happened. I had good legs and I attacked – Boonen followed me," said Hushovd.

Only Pozzato could stay within a reasonable chasing distance, but the brief delay he experienced due to Flecha's crash cost him. He got within ten seconds of the flying Belgian, but Pozzato could not close the distance and finished a disappointing second.

Hushovd, having remounted after his tumble, chased with Hoste and Vansummeren just under a minute behind the leader. Coming into the velodrome in Roubaix, the Norwegian attacked to steal the final podium spot from the demoralized Silence-Lotto duo. Flecha struggled in for sixth.

The Cervelo rider was pleased to have taken third, but said that it was not a foregone conclusion. "You never know in a sprint. I am happy to be on the podium, but it's hard that I had the crash in the most important point."

The day was another disappointment for American George Hincapie, who flatted on sector 15 just as the front group was splitting up. He had two teammates, Boasson Hagen and Eisel, to help chase but failed to make the leading group.