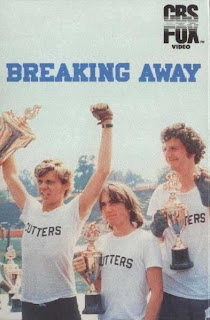 Baseball has films such as “Field of Dreams” and “The Natural.” Football has “Rudy” and “Brian's Song.” Basketball has “Hoosiers” and … “White Men Can't Jump?” (okay, there are probably better examples than that last one.)

The point is that sports and movies go together like Belgian beer and waffles. Of course cycling has a film to call its own ─ the 1979 Oscar-winner “Breaking Away.” Even the most fervent cycling fans among us might forget that the race featured in the story is, in fact, a real race... and the 58th running of the Little 500 is slated for this weekend on the campus of Indiana University in Bloomington, Indiana.

Now the drama at the center of the film's plot ─ the townie kids pitted against the silver-spooned collegians ─ was dramatic license for the film. In reality one must be enrolled as an undergraduate at the school to compete. There is a Cutters team but that was an independent team formed after the movie.

The rivalries that are a part of this race can go back decades, often involving fraternities and sororities. For many years the race was all Greek-dominated. But in the early 1980s the real Cutters team formed as a splinter group out of one of the fraternities, and won the race. Since then teams from the Greek system, residence halls and independents have traded wins with the Cutters, the team which has since enjoyed the most wins, at nine.

What is at stake? Not a dime. Whatever money the race generates, all of it goes to fund scholarships, more than $1.4 million to date. For the riders, there is only pride. But make no mistake; the level of competition that surrounds the actual race is as serious as it gets in bicycle racing.

The student-athletes, many of whom have never raced a bicycle before, train most of the year for this one event. Some are former high school sports stars, others are just in it for the experience. It is so serious the top teams pay for their riders to go on spring break training camps to Arizona and Texas, foregoing the usual fare of partying in Mexico or Florida. That represents serious dedication for a college student.

Of course it is easy to think of this race as below tier, being only an amateur college race ─ the rules mostly forbid category 1 or 2 cyclists from participating. But every year this race has tens of thousands of fans in the grandstands and has been broadcast live on television for the past seven years... and that's without Lance Armstrong racing in it! What other American race can claim that?

How does it work?
The race itself is unlike any other in cycling. It is modeled after the Indianapolis 500 motorsport race to form a strange hybrid of track, cyclocross and criterium racing. It is run as it was 58 years ago, on a “Chariots of Fire” style quarter-mile cinder track, adding the risk of some intense road rash for those unlucky enough to crash.

Riders are obligated to use what the rules define as a “stock” bike, which is about as low-tech as one can get these days. First, it weighs a lot compared to today's carbon wonder-bikes... about 22 pounds. Second, teams can only change a few insignificant parts, such as the seat and handlebars. The gearing must be 46x18, with a coaster-brake style freewheel hub and platform pedals. (The taping of shoes onto the pedals a la 'Dave Stoller' is not allowed.) What comes out of all this is a level playing field so that ability and not money determines who wins.

Teams consist of three to four riders that “exchange” during the race, making for the most unique aspect of the event. Exchanges are done on-the-fly with one rider coming into the team's designated pit, on one pedal like a 'cross racer getting a clean bike.

Meanwhile a teammate stands on the opposite side waiting to take the bike and continue racing, hoping to regain their spot in the pack. Even more challenging is that the exchange must take place within only a 16-foot long pit area. The only rule for exchanges is that there must be ten (five for the women) at any point during the race.

Like the Indy 500, the teams must qualify to be in the race, riding a 4-lap time trial with clean exchanges each lap. The fastest 33 teams make it and are seeded as such, like in the auto race, in ten rows of three. There is a 3-lap parade before the green flag is dropped for a flying start to 200 laps (50 miles) for the men and 100 laps (25 miles) for the women.

The initial laps are usually very chaotic, with the top teams fighting for position and the weaker teams trying to keep up. A crash in the first few laps is quite common and the protocol for that is identical to the Indy 500. Yellow flags slow the field down holding their positions as the carnage is swept up. Also as in the car race, the pit is a critical strategy position with a team coach using a marker board to communicate with riders.

In the final laps the race is usually down to 4-5 teams in contention, though there have been rare cases of a solo break and even recently a team lapping the field. The main strategy for teams at this point is to decide when to exchange to put the sprinter on the bike ─ too early could wear the sprinter out, and too late could cost valuable position in the lead group.

This year's event is packed with the usual rivalries and pre-race favorites. The back-to-back defending men's champions, the Cutters, have qualified third behind two fraternities with the Cutters' captain Eric Young winning the spring series' individual time trial.

In the women's race, the defending champion Delta Gamma team is farther down in seventh, and will get a challenge from the Teter dorm team who qualified for the pole position with a new track record; as well as the independent team Wing It, whose Kristi Hewitt won the ITT with a record herself.
Posted by Recovox at 10:51 AM