On the 172.5km queen stage of the Tour of the Basque Country, Astana's Alberto Contador displayed the brilliance which propelled him to three Grand Tours in his young career, soloing to victory and claiming the overall race lead.

After his teammate Chris Horner shredded the field with a vicious pace at the base of the climb, Contador flew away from the lead group on the difficult ascent to Eibar, grabbing the overall lead as his just reward.

Cadel Evans (Silence-Lotto) put in a brave attempt to bridge to Contador, but was eventually defeated and picked up by Olympic champion Samuel Sanchez (Euskaltel-Euskadi) and Contador's former teammate Antonio Colom (Katusha). The trio was within a dozen seconds of Contador but could not close down the gap.

The morning's leader Luis Leon Sanchez (Caisse d'Epargne) had been tied on time with Contador but conceded the leader's jersey thanks to the Astana rider's solo escape. Sanchez won Monday's first stage but finished 35 seconds behind Contador Wednesday.

Contador now has a nine-second overall lead over Samuel Sanchez, Evans and Colom. Fifth is Italian Damiano Cunego, 28 seconds adrift of the leader.

"I am very happy because it's always good to have a gap of a few seconds. The differences have been minimal," he said, adding that Saturday's 24km individual time trial, the final stage of the Tour, could be crucial.

"Now that I'm the leader I will try to win the event."

He said aside from Luis Leon Sanchez, he saw his main rivals as Evans and Michael Rogers, another Australian and "who has been less mentioned." 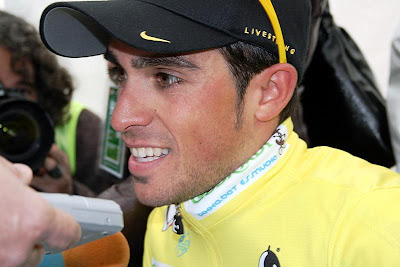