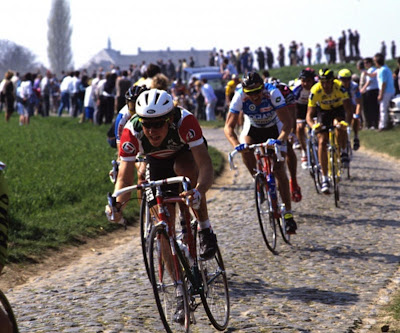 American all-rounder John Tomac is best known as one of the more charismatic and successful mountain bike racers in history, but did you know he also spent a few years racing on the road?

The Michigan native had a special clause in his dirt-racing contract that allowed him to race for Team 7-Eleven, where he competed in the Giro d'Italia and several Spring Classics, including the Tour of Flanders, Ghent-Wevelgem, and Paris-Roubaix. He raced professionally on the road from 1988 - 1991.

We asked the 41-year-old to talk about his experiences with the 'gnarly' pavé of Roubaix.

There are two spring classics that I absolutely loved. The Ronde (Tour of Flanders) and Roubaix. They were the biggies, and the ones that really mattered if you were a classics rider who specialized in the cobbled events.

Typically a pro team that rides all these big spring events is split between those who are supposed to do well on the "stones" and those who ride and target the smooth classics like Fleche Wallone, Liege and Amstel Gold. I was, by choice, one who rode the pavé. I don't think preparation has changed much from then to now, when I did these back in 1990 and '91. It's probably a bit more specialized now, but in general I had to build my programme of training and racing all the way up from December to a big peak in April. We bet it all on a two-week period and see if it paid off.

Preparations
The weeks prior to these races are typically spent racing in Belgium in races like E3 Prize, Het Volk and the Three Days of DePanne. All these races are sectioned with cobbles, and they got us tuned up for the two big ones with rainy, cold and windy conditions very typical for that time of year. Right smack-dab between Flanders (1st Sunday of April) and Roubaix (2nd Sunday of April) is Ghent-Wevelgem (a Wednesday race). Another fairly big race itself, but it can come down to a bunch sprint because the hills and pavé in that race are just not selective enough (unless it's bad weather or very windy).

Having only done these events twice, my best form was found in my second season over there, in 1991 when I was 23. I did my first year with the 7-Eleven team and my second season with Motorola (same team, run by Jim Ochowicz, but with a new title sponsor). I finished the Ronde towards the back (trust me: finishing one of these is major accomplishment, especially riding as a support guy), but in Wevelgem I felt some better form and finished top 20 in a race that split towards the end. This lined me up nicely for Roubaix: I was listed by Ochowicz as a protected rider along with Steve Bauer! It was sweet for my second year that I would get support from the team for that race. We typically rode some to all of the pavé sections the day after Wevelgem, which gave us two days recovery before Roubaix.

Equipment
During this pre-run we could sort out our bike for Roubaix, which was a bit different than our normal bike setup. We would typically try our bigger Roubaix tyres; we needed those to help against flats, as the stones in Roubaix are exceptionally big and there are also massive pot holes in some sections. We would dial in the tyre size and pressure needed with these. Wheels were also more heavy-duty to take the abuse.

Some riders would run more bar tape (double wrap it) or pad it some for vibration damping. Another good set up for Roubaix was to lower our saddles just a few millimetres to help the bike float a bit more across the cobbles. I also liked to run the bar-end shifter on the right side (instead of the down tube shifter); this was pre Shimano STI! I think my second year I ran STI. Some riders even ran RockShox custom forks back then..but that idea didn't seem to take hold for too many years.

Hell begins
Roubaix is typically relaxed at the start for two hours or so. An early break will usually go and the peloton will zip along just clicking off the kilometres. The first section of cobbles starts the real racing, with teams and riders all fighting for position for maybe 20km or so going into this first sector. The fight for this first section is unreal and it's exactly the same for the first Flanders hill. You battle for around half an hour at 60km per hour to try to get to the front of the group just before you hit the first section. You have to time it just right, otherwise risk losing 50 positions in 500 metres!

After that first section, it's game on! It can slow some between sections, but never that much. We just went from sector to sector of pavé, switching direction back and forth across northern French farmland. The roads were narrow, like eight feet wide, and sometimes riding on the dirt next to the pavé was as fast as riding the stones themselves.

The wind could be big factor also, so we needed to ride behind the right guys and stay in a good position. After maybe five sections or so came the Arenberg forest, which started the real first big selection to find the winner of Roubaix. It was the gnarliest sector in the race. The grapefruit-size stones were massive, as were the pot hole. The fans were insane there! It started downhill slightly at the start, so we entered the forest doing something like 65km an hour! The course then bottomed out in the middle and went slightly uphill for the rest of that sector. There was always a big selection in the forest and then it was flat out for the rest of the day from there, maybe two more hours or so.

Eventually the strongest man breaks all the others by outlasting them with huge efforts across the pavé sectors. Sometimes tactics would affect the race, or mechanical problems, like a flat or a crash, can determine the outcome as well. Normally the strongest man wins in the Roubaix veledrome after around six hours in the saddle.
Posted by Recovox at 5:33 PM