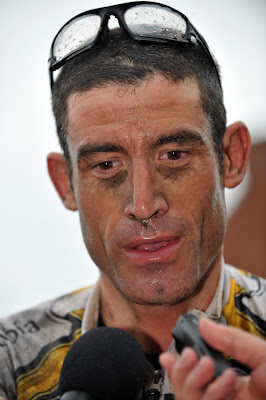 We've compiled two lists of favourites. The 'A' list consists of pre-race hot tips who are currently on form and/or have a previous good track record at the event.

The 'B' list is more a selection of riders who could break through if they get in a good escape, or luck shines on them in a chaotic bunch finish.

The weather
The current state of the cobbles is that they are wet and very muddy. However, it's forecast to be dry on Sunday, it was warm and dry on Friday in France, and currently the weather is improving fast.
Posted by Recovox at 10:36 AM