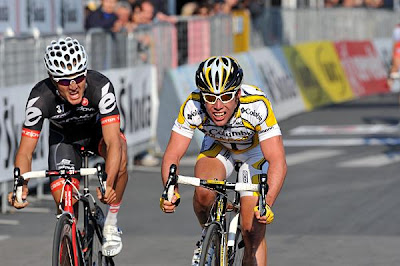 Mark Cavendish believes that experience will pay in this Sunday's Ronde van Vlaanderen. The recent winner of Milano-Sanremo will watch the race on television from home as he builds for Wednesday's Gent-Wevelgem.

The 23-year-old commented on the top favourites Friday in Gent, Belgium, one-day after the Driedaagse De Panne.

"Heinrich Haussler? I could say it is too early for him, but then I thought it was too early at Sanremo for me. He is strong, he has lost a lot of weight, he is going really well," said Cavendish.

"Tom Boonen? I think he is one of the favourites. He is not an out-and-out favourite as he has been in the past. You can't discount him, but I don' think he will be dominate like he was in the past."

The race in Belgium's Flanders consists of 16 steep (and often cobbled) climbs. It starts in Brugge and ends 260 kilometres later in Ninove.

Boonen of Team Quick Step is a two-time winner of the race. His teammate Stijn Devolder won the race last year.

Cavendish is a renowned sprinter who had a magical year in 2008. He looks even stronger this year thanks to a total wins of nine so far in 2009, including Milano-Sanremo.

"For sure I want to ride it [Ronde van Vlaanderen]. I wanted to ride it for the last ten years. It's just the atmosphere that is around the race.

"Last year, I rode the parcours with the team. I will go and do the same with them ahead of Roubaix next week."

Cavendish is training for the last of his spring objectives, Gent-Wevelgem. He finished 17th in 2008.

Following Gent-Wevelgem, he will refocus for the Giro d'Italia and Tour de France stage races.
Posted by Recovox at 10:28 PM