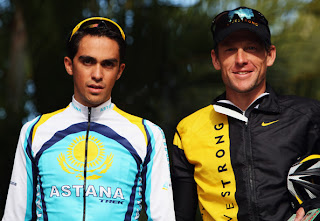 Spaniard Alberto Contador considers Astana teammates Lance Armstrong and Levi Leipheimer amongst his top rivals for a repeat victory in the Tour de France this July.

"I will have to deal with [Denis] Menchov, [Cadel] Evans, the Schleck brothers, [Carlos] Sastre and my teammates Armstrong and Leipheimer," he told Italian newspaper La Gazzetta dello Sport yesterday.

"It's not big names that make a great team"

Contador finished the Dauphiné Libéré stage race third overall yesterday. The Giro d'Italia was Armstrong and Leipheimer's last race and they finished 12th and sixth respectively. It was Armstrong's first three-week stage race since he retired after his 2005 Tour de France win.

"The problem does not bother me, the race will settle it. My goal is to do the best possible."

Armstrong, a seven-time Tour de France winner, joined his former team manager Johan Bruyneel at team Astana this winter after a three-year retirement. Contador rose as a top stage racer with wins in all three Grand Tours (2007 Tour, 2008 Giro d'Italia and Vuelta a España). The two champions have only raced 160 kilometres together this year, at the Castilla y León prior to Armstrong's crash.

"The situation is the same as before, we have been together very little: the Canary Island camp and one day of racing. That's it."

Astana will be one of the favourite teams with a total of eight Tour wins and Leipheimer's third in 2007, but Bruyneel will have to manage his stars.

"Our team, if you consider the names, is the strongest, but it's not big names that make a great team. Saxo Bank, for example, has less famous names, but is just as strong."

The Tour de France starts July 4 in Monaco. It travels through Spain and Italy prior to its arrival in Paris on July 26.
Posted by Recovox at 9:58 AM