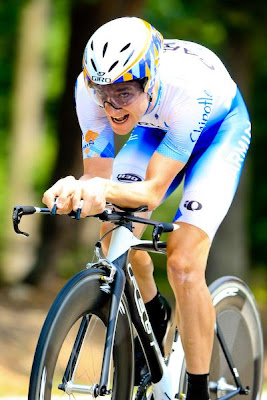 A new course and a season of injury stood in front of Dave Zabriskie (Garmin-Chipotle) as he tried to defend his time trial national championship in Greenville. Despite having an off-year he targeted this race as a way to prove he is still the fastest – both to himself and to everyone else. And he did just that, riding aggressively over the fast course to beat domestic sensation Tom Zirbel (Bissell) by just five seconds.

"I didn't care what the conditions were going to be like, what the course was, I came to win!" Zabriskie told Cyclingnews after the race. "Coming back from injury this is really just my third race back," he said. "Cycling is full of ups and downs and my career has been up and down. I've had numerous injuries so I have to say thanks to all the people who stand behind me and keep believing in me."

While this result reaffirms his status as a top time trialist, he does not think it salvages his season – particularly with only 35 starters. "It feels great to have this win, but it's not like it saves my season or anything. It's me with something to prove time and time again... that I am Dave Zabriskie!"

Giving Zabriskie a run for his money was Zirbel, who started out slow but came on steadily over the three laps of the TT course. "I knew Zabriskie was going to bring his A game and he is one of the best in the world," said Zirbel. "I knew I was going to have to have a good ride and take some chances. I just came up short."

His second place finish did spoil the sweep for Garmin-Chipotle, who still took four out of the top five with Christian Vande Velde in third, just five more seconds back. Tom Danielson came in fourth with Steven Cozza posting an early fast time and holding on for fifth.