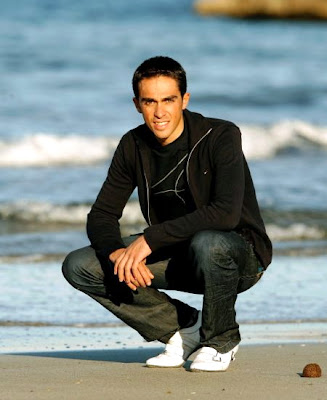 From one of many promising young riders, Alberto Contador has turned into a dual Grand Tour winner in the space of just 12 months. On the eve of the Spaniard's Olympic Games debut, Cyclingnews' Hernan Alvarez tracked down three people from his early years that knew, and still know, the Spaniard with the aim of colouring in the Contador canvas.

His directeur sportif places him in the same league as Lance Armstrong. He has been compared to Spain's greatest ever cyclist, Miguel Indurain. Alberto Contador is a double Grand Tour winner and he's quite possibly the best rider of his generation. Yet outside of his sleepy hometown of Pinto, Spain, not much is known about this shy and unassuming rider's roots, nor his pre-professional days and the early stages of his fledging career.

Luis Maria Malo Lopez met a young, gangly Contador when he started competing for the Real Velo-Club Portillo cycling club. The Madrid-based club has always placed a strong emphasis on its riders developing friendships with each other, while the club mantra - that was no doubt passed on to Contador - has always been, "if you want something, you have to work to achieve".

"He arrived as a teenager when we had a very youngster-orientated team," said Malo Lopez, who was the club's president. "A man called Javier Fernandez Alba, who was at the time our youngster sport director, took him under his wing.

"I remember Alberto starting with us in 2000," he added. "He was only with us for one year but we won everything in the calendar that year. So much of this was down to him. We had many good riders, and he was one of the best."

Malo Lopez was also the manager of Velo-Club Portillo in 2000. "One of his coaches at that time was Carlos Rosado. But when the coach was absent, I had to take his position when we competed at races," Lopez smiled. "We competed at the Vuelta a la Sierra Norte, to Ruta del Vino, and also in Santander in the circuit of Cantabria."

Rosado once told Spain's El Pais newspaper about a crash Contador had in a race in Zamora. He cut his lips and dislodged a tooth. However the junior didn't cry because of his injuries but because of his damaged bicycle, which he'd written off. That was the only bike he had.

There were no tears at this year's Giro d'Italia, the scene of Contador's latest triumph, and Malo Lopez was quick to praise his former protégé. "It was greatly satisfying because his victory felt like something I could share," he said. "I was with him when he was a teenager and then you see him winning at such a great capacity.

"All the merit is his because he knew what it would take to reach the top," he added. "When he won Paris-Nice [in 2007] and also when he won Vuelta al Pais Vasco [in 2008] the club organised a very nice tribute to him."

Contador's former manager is clearly fond of the boy who became a superstar. "Contador was a very kind boy, very educated, very organised, very nice," he said. "The day he won the Giro I sent him an SMS and he replied to me thanking me for the message. For a champion he is still very modest."

But the road from Contador's early days with the club to the Giro podium was long. Marcos Serrano, an early team-mate who rode alongside some of the world's finest riders during his long career, remembers Contador's first steps as a pro.

The 35-year-old was one of Contador's team-mates at ONCE-Eroski in 2003 during Contador's first professional season. "I saw him when he was just starting out with the ONCE team," Serrano said. "When he arrived he showed that he could have a bright future. We knew he had potential. After all he came from the youngster team Manolo Saiz had.

"Now he is a rider who has the three things any top-level rider should have in cycling: discipline, a cold mind and quality," he added.

Serrano and Contador moved together to the Liberty Seguros team. "I remember when he made his debut in the Tour de France [in 2005] that he was very surprised with the speed of the racing, but you look at him now and two years later he's won the race," he noted.

In Serrano's opinion, Contador is a rider who has the mental capacity comparable to the greatest of athletes. "In cycling, a self-disciplined rider can give you everything," he said. "I think that is his great virtue, he is very self-disciplined and he knows very well what he wants."

Serrano thinks this Giro dissipated the doubts about Contador's quality. "I think this Giro d'Italia has proved everything that was said last year to be right," he noted. "In a normal situation, he would have been second in the Tour de France and suddenly due to some special circumstances he was the winner.

"He has dissipated many doubts with this Giro d'Italia," he added. "It would have been nice if he had been able to ride this year's Tour."

Contador's Giro win was all the more impressive for his lack of preparation and training beforehand. His Astana team was notified of a race invitation to ride the Giro days before the start.

During those three weeks in Italy Contador grew in confidence and as the race began to play out, it was clear to all that he was the strongest rider. Team-mate Toni Colom was the Astana rider who shared a room with Contador.

"He is a person dedicated to his job, to his passion, cycling," said Colom. "So apart from being a professional rider he is also a lover of the sport. He talks about cycling all the time, all day long.

"He is always talking about how to improve in everything," he added. "He lives cycling as if it is his whole life."

Colom was beside Alberto during the whole corsa rosa. "I lived the race with much joy and much fondness because I was always with him. From the first day to the last," he said. "Whether it was on the road or sharing a room with him.

"The last four or five days, which were the ones with the biggest tension and the most pressure, were incredible, all day long we were thinking about how the other teams could attack us, how we could defend ourselves," he added. "He never lost his calmness, he never lost that serenity he has and always trusted in me to give him a hand."

Toni also agrees with Serrano and Malo Lopez about Contador's personal strengths. "He is a kind person, fond of his closest people and friends," Colom said. "Out of competition he knows his job has given him his social status but this hasn't affected him.

"I saw him spending half an hour signing autographs until he had finished with the last one," he said. "I think this reflects very well the kind of person he is."

His team-mate believes Contador is certainly capable of achieving more Grand Tour wins in his career. Later this season the Spaniard is expected to lead his squad at the Vuelta a España, his home Grand Tour.

"I see it being very feasible because he has time on his side and room to improve, not only in the mountains but also in the time trials," said Colom. "He is surrounded by people who can give him everything he needs. Being a 25-year-old guy who has that personality, knowing what he wants - that represents a very hopeful future.

"He is a tremendous rider," he continued. "He is smart. He has surrounded himself with the best people: the best masseur, the best mechanics, the best technicians. He is meek, that is what it makes him great. It doesn't matter much if you're a good climber or a good time-triallist, you must handle the suffering, and he knows how to handle it. That is perhaps his greatest asset."
Posted by Recovox at 10:21 AM